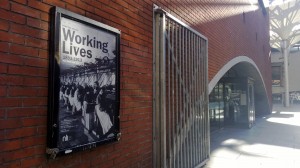 On 24 October Dinny McGinley T.D., Minister of State at the Department of Arts, Heritage and the Gaeltacht, opened a new exhibition entitled Working Lives, 1893–1913 at the National Photographic Archive, Temple Bar, Dublin.

Working Lives, 1893–1913 features 148 contemporary photographs of workers throughout the island of Ireland from 1893 to 1913 — a period of profound transformation in the Irish workplace. The images come from the Poole Collection (1884–1954), comprising some 66,000 photographic glass negatives, and the Mason Collection (1890–1910), comprising 2,000 glass lantern slides. The design of Working Lives, 1893–1913 is influenced by the concept of an industrial family album, with photographs of women, men and children of most ages, at places of work rather than at play. The exhibition was curated by social scientist and Irish labour history specialist Mary Jones.

Speaking at the launch of the exhibition, Minister McGinley said that ‘the images from the largely unknown Mason Collection are selected from the categories of “Irish industry” and “Ireland at work”, and feature photographs developed from magic lantern slides and glass plate negatives which will soon be digitised by the NLI. The working people featured in the Mason Collection photographs look into — or away from — the camera, which in the late 1800s was still novel technology. Maintaining their collective poise, these people silently challenge any assumption that they, the working people of Ireland, are mere cogs in the wheels of imperious industry.’

Working Lives reflects the organisation of the Irish Trades Union Congress in 1894, and the establishing of trade-specific bodies such as the Irish Drapers Assistants’ Benefit and Protective Association in 1901, and the Shop Act of 1912. Political and legislative initiatives, including the 1902 Report on Children’s Street Trading and the 1904 establishment of the Irish Central Bureau for the Employment of Women, inform the narrative framework of the exhibition. The exhibition also links images documenting a period of profound change, manifest in industrial tension across Ireland, visible in the photographs of the 1897 Pig Strike in Waterford, the 1906/7 Linen Strike in Belfast, and the 1911 Lockout at Pierce’s Foundry in Wexford. Such tensions set the context for the Dublin Lockout in 1913, which is currently the subject of a major mixed-media exhibition in the NLI’s Kildare Street premises.

The exhibition runs at the National Photographic Archive in Temple Bar, Dublin, until May 2014. Admission is free.