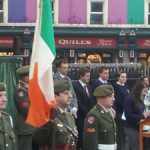 On Sunday 30 March Jimmy Deenihan TD, Minister for Arts, Heritage, and the Gaeltacht, attended the unveiling of a memorial to the Headford Ambush of 21 March 1921, along with Senator Mark Daly and the transition year class of Pobalscoil Inbhear Scéine.

The Headford Ambush, which involved an attack on British troops by member of the Kerry IRA at Headford Junction rail station, was the largest engagement to take place in Kerry during the War of Independence.

For the text of Minister Deenihan’s speech, click here.

From History Ireland: The Headford Ambush