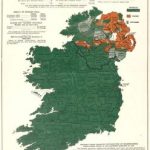 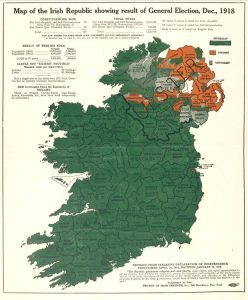 The postwar UK general election of 14 December 1918 was one of the pivotal events of the Irish revolution. A newly expanded Irish electorate including, for the first time, some (though by no means all) Irish women, voted in unprecedented numbers in favour of the post-1916 incarnation of Sinn Féin, who fought their election campaign on an explicitly separatist platform and who won 47% of votes cast, and 73 of Ireland’s 105 Westminster seats. Given that many of the seats that they won were not even contested, their share of the vote was almost certainly higher, though it cannot be quantified. While unionist candidates consolidated their position in the north-east, and the Labour movement did not contest the election, the losers were the Irish Parliamentary Party, who were effectively wiped out as an electoral force in what was easily the most important election in twentieth-century Ireland. This was the most significant legacy of the election: the fact that separatist republicanism replaced the demand for Home Rule as the dominant political force in nationalist Ireland. Sinn Féin never took their seats in Westminster, establishing Dáil Éireann in Dublin instead the following January, and the 1918 election decisively registered popular support for full independence from Britain as never before.

The December 1918 election was the subject of a recent History Ireland ‘Hedge School’ debates, recorded at the Allingham Festival in Ballyshannon, focused on the election itself; a full recording can be streamed or downloaded here.

RTÉ have established a very useful mini-exhibition on the 1918 election, collating a wide range of archival material, analysis, profiles of key figures, and of course its novel 1918 election ‘broadcast’ presented by David McCullagh. The election is also covered extensively on Century Ireland, including this analysis of the significance of the election, and this overview of its significance for Irish women. This is also the dominant theme of the most recent Irish Times‘ supplement on the ‘Decade of Centenaries’, which takes as its theme the exercise of the vote by Irish women for the first time; it can be read online here.