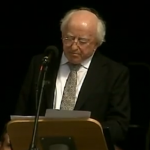 On 12 April 2012 over 5,000 people attended a commemoration service in Cobh, held for all those who died on the Titanic. The luxury liner left Cork Harbour on 12 April 1912.

President Michael D. Higgins led the commemoration, telling those in attendance that it was right that time be taken to respectfully remember with all those who died on the Titanic, and the thousands more whose lives were devastated by the loss of their loved ones in the North Atlantic.

Four commemorative Titanic stamps, commissioned by An Post, were unveiled at the event. These stamps show naval architect Thomas Andrews, who oversaw the design of Titanic amateur photographer Fr Francis Browne, who captured the Titanic on film; ‘Unsinkable’ Molly Brown, who survived the diaster; and Titanic’s captain, Edward J. Smith.

Minister for Agriculture Simon Coveney and Minister for Innovation Sean Sherlock joined the President at the event, as did  Minister for State for Northern Ireland Hugo Swire, and acting British Ambassador Andrew Stanton. President Higgins concluded the event by carrying out an international naval service fleet review from the deck of the LE Eithne.