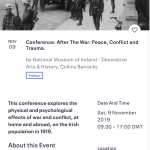 November 2019 Now that the Halloween sugar rush is gone, it’s time to get the diary out for the many history events coming in November.

This month the events below are listed by location.

Conference: After The War: Peace, Conflict and Trauma.

This exhibition is located in the Gothic Room in the State Apartments and will run until the end of the year.

Entry is free and tickets can be obtained from Dublin Castle’s ticket desk.

‘The Oratory of the Sacred Heart was built on the grounds of St. Mary’s Dominican Convent in 1918 and dedicated to the Sacred Heart in 1919. It commemorates the many local Irishmen who fought and died in the Great War. From 1920-36 it was hand-painted by Sr Concepta Lynch, a Dominican nun at St. Mary’s and the result is a stunning example of the Celtic Revival style.

A new exhibition based on the publication Divine Illumination will be on display on Level 3 at dlr LexIcon from 11 October 2019 – 4 January 2020.’

Supported by Dún Laoghaire-Rathdown County Council, Dept. of Culture, Heritage and the Gaeltacht, Dominican Sisters, Cabra and the National Gallery of Ireland.

An inconvenient truth? Sexual violence and the Irish Revolution

To be held in the National Photographic Archive, Temple Bar.

The panel with Tommy Graham will be Linda Connolly, Lindsey Earner-Byrne, Tom Clonan and Brian Hanley.

Details of all events available *here*

Visit Ballinalsoe Library for a free talk by Una Kavanagh on Lady Clonbrock.

This November Galway’s Great Read is marking the 120th anniversary of the establishment of democratic local government in Ireland.

Organised by: Galway Public Libraries in collaboration year with the Heritage Office and Archives of Galway County Council.

Democracy and the People

This conference is supported by the Department of Culture, Heritage and the Gaeltacht under the Community Strand of the Decade of Centenaries programme.

Labour, Gender and Class in the Struggle for Irish Independence, c.1918-24

This major labour history conference, part of the Government of Ireland’s Decade of Centenaries programme, features sixty scholars who will scrutinise the interplay between labour, gender, and class during the revolutionary period.

Held in NUI Galway and organised by the Irish Congress of Trade Unions and the Irish Centre for the Histories of Labour and Class (NUIG), supported by the Department of Culture, Heritage and the Gaeltacht.

(in association with the ICTU & the Irish Centre for the Histories of Labour and Class, NUI Galway)

Labour and the North and the National Question

But how did this pan out in the subsequent War of Independence? Members of the trade union movement, the largest civil society organisation in Ireland at the time, were involved in a range of activities, from cultural resistance, to industrial action, to civil disobedience, served in Dáil Courts and local authorities, as well as the armed struggle. Yet Labour was left in a relatively weak position in the politics of the consequent Irish Free State.

Supported by the Commemorations Unit of the Department of Culture, Heritage and the Gaeltacht

‘Mobilise the poets’—art & culture in the Irish Revolution

So exhorted Arthur Griffith from his Gloucester Prison cell in January 1919. But how did the arts (literature, film, the visual arts, music and song) affect the Irish Revolution?

How in turn did the Revolution affect the arts?

To be held at the Allingham Festival, Abbey Centre, Ballyshannon

This Hedge School is funded by the Commemorations Unit, Department Culture, Heritage and the Gaeltacht.

Tickets at the door, €5. Refreshments served.

A small extract from our October 2018 newsletter:

The global influenza pandemic of 1918-19 – the so-called ‘Spanish flu’ – killed as many as 50 million worldwide. The huge mobilisation and demobilisation of troops before and after the end of the First World War seems to have spread it across the globe, and, having been first recorded in Belfast in June 1918, the flu arrived in Ireland in successive waves from the summer of 1918 onwards. The latest estimates, by Ida Milne, suggest that perhaps as many as 800,000 people in Ireland were infected (one in five of the Irish population), and over 20,000 died. This makes the pandemic one of the greatest killers of the ‘Decade of Centenaries’, albeit one that is often overlooked.

The centenary of the pandemic in Ireland cannot be distilled into one single event. An overview of the global pandemic can be found in the International Encyclopedia of the First World War. An overview of its impact on Ireland by Guy Beiner, Patricia Marsh and Ida Milne can be found in this article from History Ireland (and the authors also participated in a History Ireland Hedge School on the pandemic, recorded in 2018).

Longford and the global Irish Revolution

In discussion with Tommy Graham will be Mel Farrell, Paul Hughes, Darragh Gannon and Ailbhe Rogers.

If you would like to inform us of a suitable talk/exhibition/play – anything related to the Decade of Centenaries – please feel free to email centenaries@historyireland.com.