We are used to thinking of the First World War as the moment when society was confronted with the new horrors of industrialised warfare. Indeed, the scholarship of the war has focused in recent years on how far the conflict encouraged the development of the ‘modern age’.[i] New concepts of art, literature, politics and society are regarded as emerging from the war as societies adjusted to the legacy of bereavement and trauma. However, for many observers, the war was a return to a distant past rather than an embrace of an unknown future.

Historians have noted the reference to classical or medieval motifs in wartime writing but to many the conflict was comparable to a prehistoric age where now extinct animals roamed the Earth. By asserting this vision of the ancient past, a war which wrought death on a previously unimaginable scale, was rendered understandable and meaningful. Far from some confrontation with modernity, the war marked a return to the past.

Visions of a prehistoric landscape dominated the reporting of the battlefields in letters, diaries and memoirs. The British war correspondent William Beech Thomas (1868-1957) described the battlefields of the Somme after the 1916 offensive on the Western Front as a scene of ‘primeval slime’.[ii] The history of the 12th Bermondsey Battalion detailed how the conditions on the Somme created soldiers who ‘bore no resemblance to human beings, haggard, sleepless, filthy, like creatures of the primeval slime’.[iii] In his memoirs, the British Army veteran Charles Carrington stated how the war had reduced Flanders to a ‘primeval marsh’.[iv]

In this environment, it was perhaps inevitable that references to dinosaurs begin to appear as a way of explaining both the terror and the excitement that the war induced. As has been noted by scholars such as Santanu Das and Trudi Tate, allusions to dinosaurs were particularly popular in explaining the use of tanks on the battlefields.[v]

From their first introduction in 1916 by the British Army, these armoured vehicles were immediately regarded alongside the dinosaurs which had been excavated, studied and displayed in the museums of Europe and North America since the nineteenth century. Just as visitors to exhibitions were enthralled by the sublime sight of such creatures, this new military technology was regarded on similar lines.

‘…(the tanks) must have recalled the terrors of prehistoric man when dinosaurs and pterodactyls, assailed his primitive cave dwelling.[vi]‘ 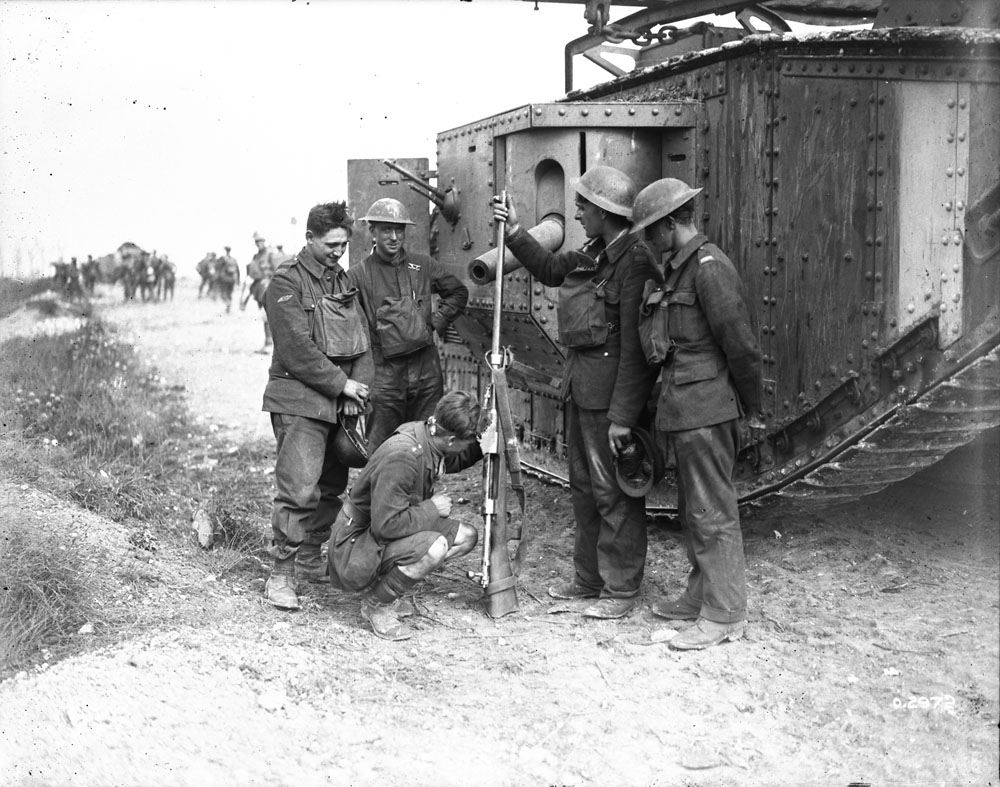 Tank Officer and Men interested in an anti-tank rifle captured by Canadians. Battle of Amiens. August, 1918*.

The American historian Arthur Riggs (1879-1952) wrote of his experiences with the British Army Tank Corps as a journey back through time where he was confronted with the extinct animals of a primeval Earth. In his description of a scene of a collection of tanks, Riggs was moved to comment:

‘…other tanks rested at various angles…all of them terrible, ludicrous, inspiring — monsters from some prehistoric age who had gallantly come to help their puny masters (Riggs 1917: 102).[vii]‘

Reporters and commentators for newspapers in the United States and Britain in their explanation of the progress of the war on the Western Front in France and Flanders described the tanks of the battlefields through similar references:

‘After some two hours of progress we came, in that devastated district near the front, to an expanse where many monsters were clumsily cavorting like dinosaurs in primeval slime…[viii]

‘…the return to earth of ichthyosaurs or dinosaurs spouting bullets from their nostrils could not have been more amazing.[ix]‘

The effect that the tank was regarded as having upon the enemy was also asserted in the same manner so the confrontation with modern warfare was rendered into a presumed brutal and savage past:

‘And the effect upon the morale of the enemy was not, indeed, unlike produced if some prehistoric dinosaur suddenly appeared upon the battlefield’.[x]

The size, ferocity and capabilities of the tanks were all explained by reference to dinosaurs and other prehistoric animals. The advances made through these machines were described as evidence of the power of the military against the enemy and the inevitability of victory. Indeed, Max Pemberton (1863-1950) writing in the popular British magazine, War Illustrated, reported to the public that the new mode of waging war harnessed the power of prehistoric animals which would secure success on the battlefields: 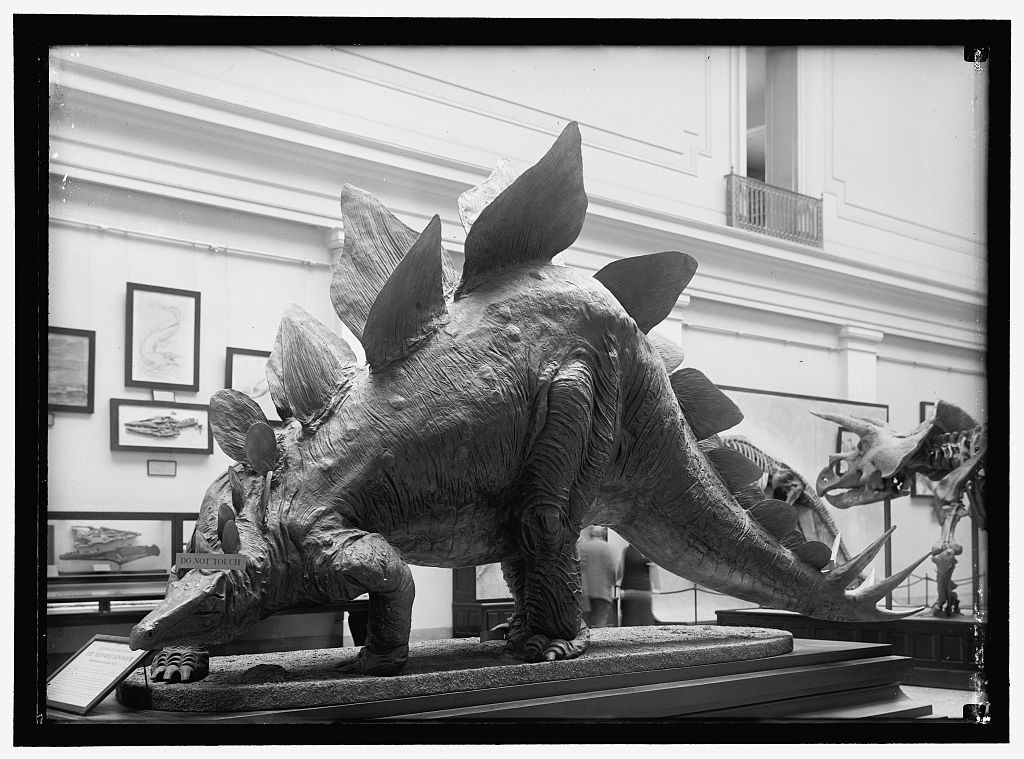 Dinosaur mounted in the Smithsonian. Available via the Library of Congress. https://www.loc.gov/item/hec2008005324/.

The ‘steel pterodactyls’ referred to within this statement indicates the use of this allusion for other new weapons of the war as the aeroplanes of the Royal Flying Corps were represented through this prehistoric association. Prehistoric references to the weapons, conduct and politics of the war can be noted. Indeed, in the account of the 1st Battalion of the Cambridgeshire Regiment, Brigadier-General E. Riddell and Colonel M. C. Clayton stated that despite ‘modern weapons’ the war was ‘still prehistoric in its conduct’.[xii]

The enemy’s weapons were also placed in this context but instead of emphasising the terror and force of the army these references asserted the brutality and savagery of the German Army. For example, in the anonymous poem, ‘Death of a Zeppelin’, published in the highly popular anthology in Britain, The Muse in Arms, the German Empire’s airships were described as ‘the man-made Dinosaur that haunts the night’.[xiii]

Away from the battlefields, pacifist groups decried the ‘dinosaur’ mentality of the countries that waged war upon one another and stated that they would follow the animals into extinction.

The ways in which the conflict was regarded as a return to the past not a new era demonstrates how contemporary observers used these allusions to make sense of the anxieties, fears and the excitement of the war. The image of the prehistoric era was evoked to demonstrate the significance of the event. This was a war which was comparable to the great creatures which once dominated the Earth.

Despite the innovations and inventions brought by the war, it was understood not as the advent of the modern age but as comparable to the great ages of prehistory.

Posted in Ireland and the World, Uncategorized, World War One