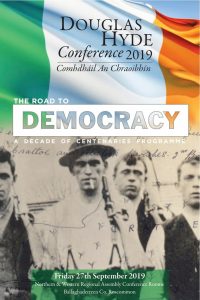 This one day programme is part of the Decade of Centenaries programme
which sees a number of invited speakers, academics and historians reflect on the events of a hundred years ago under the conference tile of The Road to Democracy.
The conference is divided into four themed sessions with two speakers with each covering the significant issues of Revolution to Democracy, Dáil Eireann Centenary, War of Independence and Art & Archives. Audiences will have an opportunity to hear from speakers about the transformation of a revolution with violence of the period into functioning
democracy, the attempts to gain international recognition, the symbolism and choreography
of the first Dail meeting, the drift into the War of Independence, the difficult role of the Royal
Irish Constabulary, art, revolution and reality and of the important value of the military
archives pensions collections as first hand local accounts of events in Roscommon. 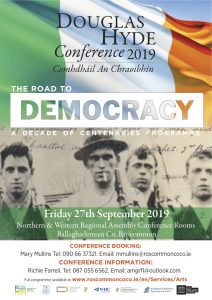 Speaking in advance of the conference the Chief Executive of Roscommon Country Council,
Eugene Cummins remarked:

As we continue our programming for the latter half of the decade of centenaries, the Douglas
Hyde Conference has provided an important cultural vehicle in which the multiple
perspectives of history and events of one hundred years ago can be presented and
explored. This year the conference invites us to explore and examine the events of 1919
from the founding of the First Dail and the outbreak of the War of Independence to the
stories and narratives of the local events of the period.

I am delighted as Cathaoirleach of Roscommon County Council to welcome the programme
for this year’s Douglas Hyde conference. It is a conference that has endured for over thirty
years and still continues to enjoy a cherished position in our annual calendar of events. The
conference is guided by the legacy of Douglas Hyde, the first President of Ireland, a
Roscommon native and a figure whose influence casts a long shadow on historical events
which are part of this year’s local authority Decade of Centenaries programme.

For a full list of speakers you can find the conference brochure available to download here or from:

The second half of the Decade of Centenaries 1917 – 1923 has formed the foundation of
programming for recent Douglas Hyde Conferences. The conference this year continues that
approach and once again examines major themes of the period which were defining
moments on our journey towards nationhood. These events include the transformation of a
revolution with violence into a functioning democracy, Ireland’s claim to self-determination
and the attempts of the fledgling state to gain recognition on the international stage.

Significant historical events nationally of 1919 such as, the founding of Dail Eireann and the
outbreak of the War for Independence form part of the conference sessions programme
while the transition to new political allegiances and economic desires that defined the
broader period 1912 – 1923 closer to home locally in County Roscommon are also
presented.

The conference programme also looks at the difficult role and divided loyalties of
Royal Irish Constabulary during these turbulent years , while the Art & Archives segment of
the programme looks at the visual culture of the period and the presentation on the
collections of the military archives which provide invaluable first hand research.

The programme is guided by the work of the Expert Advisory Group on Commemorations
but is also equally conscious of the local stories and experiences in County Roscommon. The
enduring legacy of Douglas Hyde and in particular the influence of the Gaelic League in
shaping the revolutionary generation which forms an historic thread to events being
discussed are important influences in shaping conference proceedings.

The conference is an opportunity to highlight the ongoing research being conducted and to
emphasise the considerable broadening of the frameworks for interpreting events of 1917-
1923.This form of discourse is essential in any honest exploration of our history. It is an
opportunity at a very local level to hear from a number of expert speakers to widen and
deepen our historical understanding of the significance of the events being commemorated
in 1919 among the public at large.