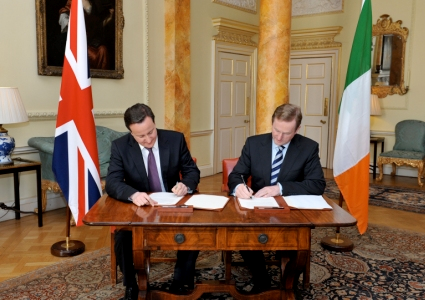 The relationship between our two countries has never been stronger or more settled, as complex or as important, as it is today.

Our citizens, uniquely linked by geography and history, are connected today as never before through business, politics, culture and sport, travel and technology, and of course family ties.

Our two economies benefit from a flow of people, goods, investment, capital and ideas on scale that is rare even in this era of global economic integration.

We enjoy a uniquely close political relationship, grounded in the progress which we have led together over the last 25 years in the peace process in Northern Ireland. We stand together in continuing and unqualified support for the Agreements and institutions to which the process led.

2011 was a momentous year, with the State Visit of Her Majesty The Queen to Ireland serving as a symbol of a modern, deep and friendly relationship. We look forward to the prospect of a return State Visit by the President of Ireland at an appropriate time.

2012 brought another symbolic representation of our enduring relationship, with the Olympic Torch travelling to Ireland in June, to shine a light on the rich heritage and sporting ambitions of our athletes as they prepared to participate in the London 2012 Olympic Games.

2012 also marked the beginning of a decade of centenary commemorations of events that helped shape our political destinies. This series of commemorations offers us an opportunity to explore and reflect on key episodes of our past. We will do so in a spirit of historical accuracy, mutual respect, inclusiveness and reconciliation.

But we want to ensure that this is a decade not only of remembering but also of looking forward; a decade of renewed and strengthened co-operation between our two countries.

To that end we have initiated an intensive programme of work aimed at reinforcing the British Irish relationship over the next decade.

We will maintain our efforts to promote reconciliation, underpinning the Executive's objective of creating a cohesive, shared and integrated society in Northern Ireland. We will work together with the Executive, to encourage the marking of forthcoming centenaries in a spirit of mutual respect, and the promotion of understanding.

We intend that this Joint Statement will be the starting point for realising the potential over the next decade of even stronger relations for current and future generations living on these islands.

The announcement of the establishment of this Group stated that the first objective would be the preparation of “An overview statement to inform the development and delivery of the commemorative programme for the period 2012-2016”.
The advisory group, is, first and foremost a collection of individual professional historians with individual research interests, interpretations and institutional affiliations. What unites us is a desire to make a contribution to meaningful and informed commemoration in the form of advice to the government on official commemorative events. We do this in a spirit of public service and completely independently of any political views, agendas or influence. While serving on this advisory group, we will all be involved individually in historical research and in the dissemination of our findings, and making individual contributions to debates around commemoration. Any ideas or views that we express in that personal professional capacity should not be taken as representing the views of the Advisory Group. We see our advice as being particularly relevant under the following headings:

The coming years see the centenary anniversaries of some of the most significant events in the history of modern Ireland and of the United Kingdom, and equally importantly in the history of the modern world. The decade saw the emergence both of an independent Irish State and of Northern Ireland with a devolved government within the UK. The commemorative programme should illustrate how events in Ireland were rooted in continuing traditions and also were part of the wider international story. A comprehensive commemorative programme should not only address the key events in Ireland but also enhance the understanding of the wider United Kingdom, European and world context in which they took place.