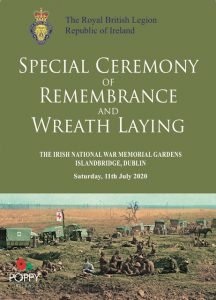 A special ecumenical service of commemoration and wreath-laying was held at the Irish National War Memorial in Islandbridge on 11 July at 12.30pm. This annual Somme time event is arranged and led by the Royal British Legion Republic of Ireland District with the co-operation and assistance of the Irish Government.

Due to Covid-19 restrictions, this year a special ‘scaled-back’ and socially distanced commemoration took place in the reflective west Rose Garden of Irish National War Memorial at Islandbridge.

This annual event commemorates all those who lost their lives at the Battle of the Somme in 1916 and in the two World Wars; in particular the estimated 60,000 Irish men and women who served and died in those conflicts; it remembers too the often unacknowledged loss felt by Irish wartime families of those generations.

Staged as ‘Shared Island’ event in the 32-county Irish National War Memorial. Representation of all traditions of the Island of Ireland is a central feature of this commemoration and the standards of Royal British Legion Republic of Ireland and Northern Ireland are on parade throughout an ecumenical service of Remembrance.

Brian Duffy, Legion Chairman in the ROI said “At Islandbridge.. we honour the men of Battle of the Somme, not as some story of ‘Them’ or somehow ‘Other’ but truly as a story of ‘Us’ –   indeed, as an experience that truly binds all of the nations here”.

Official wreaths were laid by Minister of State* Jack Chambers TD on behalf of the Government. Wreaths were also laid by the ambassadors of the Somme nations (UK, France, Germany, New Zealand and Australia).

Service and veterans groups from the UK and Ireland were also represented.

A special wreath was laid this year on behalf of all those who cannot to be present at 2020 Islandbridge due to social distancing regulations.

Music was  provided jointly by musicians of the Irish Defence Forces and the Royal Irish Regiment.

Photos of the event *here* by the official event photographer John N O’Byrne.

(*On date of posting to this site Jack Chambers TD had since been appointed as Government Chief Whip).