Somme100 FILM will bring together 100 live orchestral performance of the iconic, Unesco-listed 1916 film The Battle of the Somme with composer Laura Rossi’s acclaimed score, from July 1st 2016 to July 2017. 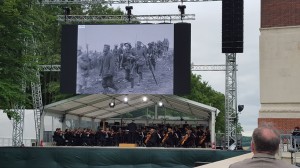 The project commenced on 1 July 2016, with Sakari Oramo conducting the BBC Symphony Orchestra in a live performance of The Battle of the Somme, as part of the national commemorative event at Thiepval Memorial, France.

Broadcast live on BBC TV, the event was attended by world leaders, members of the British Royal Family, servicemen and the 8000 members of the public.

Live orchestral screenings took place the same day with performances in London, Manchester, Berkhamsted and Southend-on-Sea. Screenings in July have included Camden Symphony Orchestra, and Chetham’s Sinfonia at Manchester Cathedral, who also featured on BBC The One Show with composer Laura Rossi and IWM curator Matthew Lee. Laura Rossi and specialist film historians including Dr Toby Haggith, Senior Curator at IWM have given pre-concert talks about both the film and the music as part of live screenings.

On 18 November 2016, which will mark 100 years since the end of the battle, the BBC Concert Orchestra will perform live with the film at the Royal Festival Hall, London.

Somme100 FILM are working with the Imperial War Museums (IWM) as part of the First World War Centenary Partnership, to show The Battle of the Somme to audiences across the world alongside performances of Laura Rossi’s acclaimed score. Somme100 FILM is supported by the Arts Council England, and project partners Faber Music.

Composer Laura Rossi and specialist film historians can be booked to give pre-concert talks about both the film and the music as part of the live screening.

There is also a linked education project with free downloadable resources for secondary schools.

There are already over 60 confirmed live screenings and more performances are being actively sought by amateur, professional and youth orchestras. If you are interested in performing or putting on a live screening please visit: www.somme100film.com

Post Views: 43
Posted in Ireland and the World, Other News