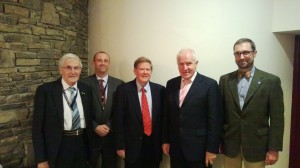 A major international conference entitled ‘Ruairí Mac Easmainn/Roger Casement (1864–1916): The Glocal Imperative’, organised by the University of Notre Dame and the University of Limerick, took place in Tralee on 24–26 October. The conference, which attracted considerable public interest, was addressed by a range of experts on Casement from Ireland and the Americas.

Jimmy Deenihan T.D., Minister for Arts, Heritage and the Gaeltacht, introduced a keynote lecture in the Siamsa Tire theatre on 25 October by Prof. Robert Schmuhl of the University of Notre Dame, entitled ‘Roger Casement and America’. In his remarks, Minister Deenihan explained the commemorative programme for the Decade of Centenaries, and placed Roger Casement within the context of the centenary programme, especially with regard to the forthcoming centenary of the First World War. Minister Deenihan, in conclusion, spoke of the need for the commemorations to be as inclusive, respectful and tolerant as possible, and said that ‘there is a degree of maturity on this island where we can all respect each other’s differences’.