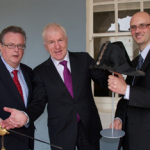 On 20 April 2012 Minister for Arts, Heritage and the Gaeltacht, Jimmy Deenihan, TD, launched an exhibition of artifacts relating to the life of Sir Roger Casement (1864-1916) – in particular his sword and his hat – which were seized by the London Metropolitan Police after his arrest in 1916. These had remained in the possession of the Metropolitan Police until last March, when they were returned to the National Museum of Ireland. 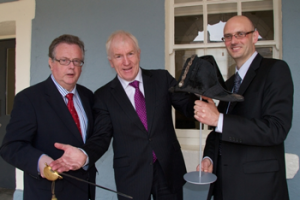 These items are of particular interest because they had been worn Casement in 1911 when he was knighted by King George V for exposing the abuses suffered by natives employed in the rubber trade in the Putamayo region of the Amazon basin. Casement’s hat and sword were placed on public display for the first time ever in the National Museum of Ireland on Wednesday 20 April 2011.

The items came into the possession of the London Metropolitan Police following Sir Roger Casement’s capture on Banna Strand, Co. Kerry, prior to the Easter Rising. Casement was subsequently hanged for treason in Pentonville Prison, London in the summer of 1916. His body was returned to Dublin in 1965 and re-interred in Glasnevin cemetery.

The items were presented to the director of the National Museum by John Yates, Deputy Commissioner of the London Metropolitan Police, at a reception in the Irish Embassy in London in March 2011. They were placed on display in the Soldiers and Chiefs exhibition, which traces Ireland’s military history from 1550 into the 21st Century, in the National Museum, Collins Barracks.

Learn about the National Museum of Ireland’s Soldiers and Chiefs exhibition.