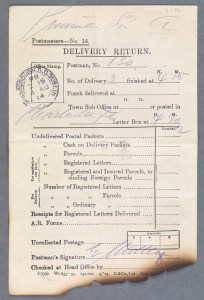 The centenary commemorations have fuelled a deeper scholarly interest in the material culture, objects and ephemera associated with the 1916 Rising, and the role of the public in collecting such items. In fact, much of the 1916-related objects in public collections, and which make up the exhibits in most of the major commemorative exhibitions, were initially preserved as personal souvenirs or keepsakes.

Amidst all of the chaos and confusion in the days and weeks following the Rising, many Dubliners realised that they were participants in, or witnesses to, history in the making. They began to accrue, purchase, or even manufacture their own memorabilia. Military insignia, arms and equipment, as well as seemingly mundane objects now became treasured items because of their proximity to the action or the story that could be attached to them. One such example is the singed postal docket, collected from the ’still hot ruins of the GPO’, as outlined in an earlier post to this blog. Sometimes there was a political motivation to this kind of activity, but often it arose merely from a collector’s impulse, and the ‘aura’ that now surrounded these objects.

Some members of the public also compiled scrapbooks as a means of preserving their own recollections together with carefully ‘curated’ examples of printed ephemera, pamphlets and postcards. The items gathered together in Elsie Mahaffy’s diary, also covered previously in this blog, represent just one instance of the way in which mass-produced ephemera could be harvested into a very personal commemoration of events.

The Library has become the grateful recipient of a number of such personal collections, and important items associated with the Rising. Among these is the copy of the Proclamation stripped from the walls of the GPO by a member of the Montgomeryshire Yeomanry and acquired by the Library from Major Louis Tamworth. Another is a badge which had made its way into the possession of Lucas King, Professor of Oriental Languages in Trinity College, by the August of 1916. He transferred it to the Library in an envelope which stated that it was the ‘cap badge of a Sinn Fein Commandant’, although there is no way of further authenticating its provenance.

Another member of staff, Henry Dixon, Professor of Botany, retrieved and donated one of the more evocative ‘souvenirs’ in the Library’s collection: the casing of a bullet, the significance of which, as Dixon realised, was entirely dependent on its immediate context. He had it mounted on card with a label to the effect that it had ‘penetrated [the] roof of the [College] Library’ during the Rising.