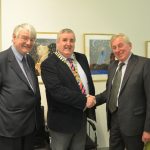 This public meeting was organised by Dr Maurice Manning and Dr Martin Mansergh, chair and vice-chair of the Expert Advisory Group on commemorations, which was established by the Government in 2012 to assist it in its efforts to frame an appropriate approach to the centenary commemoration of the ‘revolutionary decade’ in modern Irish history, 1912-22.

Prior to the meeting Jimmy Deenihan TD, Minister for Arts, Heritage and the Gaeltacht, under whose remit the Decade of Centenaries falls,  stated that ‘I welcome this third consultation meeting as it seeks both to inform and engage with local communities as the work of the Decade of Centenaries proceeds. I would urge everyone to become involved in these meetings as they are vital in keeping Government informed of the many interests and initiatives of local groups and the views of these people will be taken very seriously by Government in our approach to the centenary of the Rising, the Somme and other key events’.

The Minister particularly paid tribute to the Drs. Martin Mansergh and Maurice Manning, the Chair and vice -Chair of the Expert Advisory Group whose advice has been hugely important in ensuring that important centenaries such as the Dublin Lockout or the founding of Cumann na mBan are commemorated in a way that is accurate, authentic and appropriate in tone.

Minister Deenihan also thanked the local contributors to the meeting-namely Mr Sean Hogan, author of “The Black and Tans in North Tipperary” and Sgt John Reynolds of the Garda College Museum.

The first part of the session consisted of a brief overview of both the work of the committee and the broader range of commemorative initiatives involving the Irish government. Speakers included Mr Mark Duncan of the RTE/Boston College “Century Ireland” project, Mr Sean Hogan, author of “The Black and Tans in North Tipperary” and Sgt John Reynolds of the Garda College Museum.

The main part of the evening was a forum in which the Tipperary public expressed their opinions on what considerations the government should take into account in framing its policy towards the commemorative decade, especially in the years leading up to the centenary of the 1916 Rising.

The event was free, and open to all members of the public.

This meeting was be the third in a series of consultation meetings initiated by the Expert Advisory Group who are seeking to make contact with local history societies, local authorities and community and voluntary organisations with interest in and knowledge of events relating to the ‘Decade of Centenaries’. The group is keen to become aware of local commemorative initiatives that are already in preparation as well as to enhance their understanding of local history and events that should be marked either by the State or by local groups