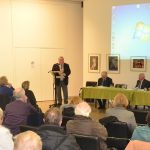 Dr Maurice Manning and the Expert Advisory Group on commemorations hosted a public consultation meeting in the Royal College of Surgeons, St Stephen’s Green, Dublin 2, on Monday 28 April, from 5.30pm. The meeting was intended to showcase the variety of projects being undertaken by the state as part of the Decade of Centenaries, and included presentations from the Military Service Pensions Archive, RTE Century Ireland, History Ireland, and by Prof. Mary Daly of UCD, along with displays of relevant publications relating to the period by Wordwell Books, O’Brien Press, Irish Academic Press, and Mercier Press.

A wide range of issues were raised by members of the public and interested parties in the question and answer session that followed: the possibility of commemorating members of the RIC/DMP killed in the revolutionary period; the proposed plans for the redevelopment of Moore St; the possible Irish relevance of British World War One centenary initiatives, especially the ‘Lives of the First World War’ project being undertaken by the Imperial War Museum; a project to commemorate Irish survivors of the First World War; the possibility of commemorative initiatives being undertaken on a local basis, possibly using crowd-funding as a means of obtaining additional resources at local level; the related issue of integrating centenary projects into the secondary school curriculum; plans to commemorate the Howth gun-running; a forthcoming exhibition on Patrick Pearse and the United States to be held in the Pearse Museum; the long-term viability of online resources; the role of the expert group chaired by Dr Manning; and the issues raised by the possible involvement of the the British Royal Family in commemorative initiatives in Ireland.

This meeting was the fourth in a series of consultation meetings initiated by the Expert Advisory Group who are seeking to make contact with local history societies, local authorities and community and voluntary organisations with interest in and knowledge of events relating to the ‘Decade of Centenaries’. To date, meetings have been held in Carlow, Thurles, Cork and Kerry, with more to follow. The intention is that similar consultations will have been delivered across the country by 2016.  The purpose of the meetings is for the Expert Advisory Group to become aware of initiatives being brought forward by local authorities and community and voluntary groups, and to stimulate discussion, encourage co-operation, and identify key issues. The group is keen to become aware of local commemorative initiatives that are already in preparation, as well as to enhance their understanding of local history and events that should be marked either by the State or by local groups.