Use the links below to explore a range of commemorative projects and initiatives, sensitive to the local historical context of the period.

(The list will be continually updated as councils develop their plans)

The focus for the Carlow County Council Decade of Centenaries Programme 2020 is on Kevin Barry who was executed 100 years ago this coming November 1st.

The main event is Kevin Barry and the Oral Tradition which has been a year in the making.

A Carlow story told by Carlow people, the event will outline the various influences on Kevin as a young boy growing up in Tombeagh, Rathvilly with particular emphasis on the songs and stories which shaped his views and principles.

Filmed in VISUAL Centre for Contemporary Art and GB Shaw Theatre, Carlow Central Library and the Barry household, the feature will provide for a fitting remembrance of and reflection on a young man who went to his death at a time of great difficulty for this country.

Kevin Barry and the Oral Tradition is complimented by three other events which will also be delivered online during the first week of November.

Due to the current COVID-19 restrictions, all events are being pre-recorded and will be broadcast online through the Carlow County Library YouTube Channel and circulated through social media. All information on upcoming events are available *here* 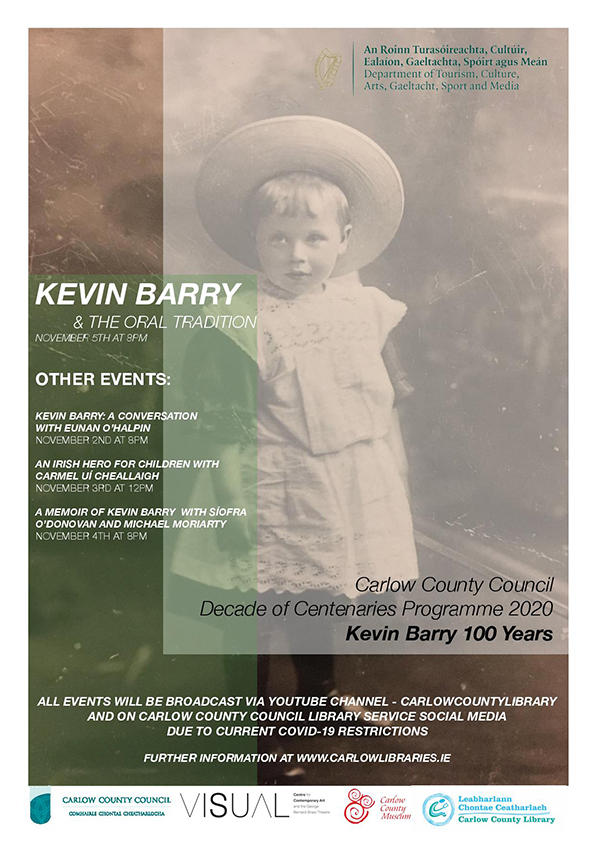 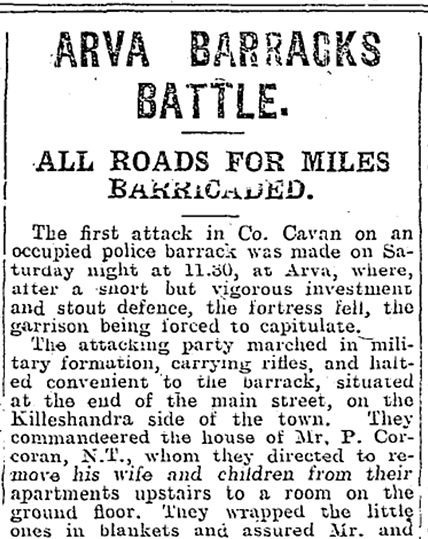 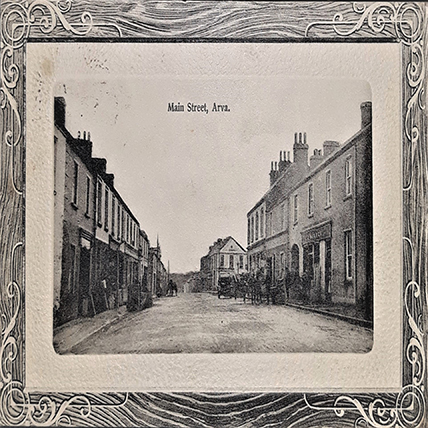 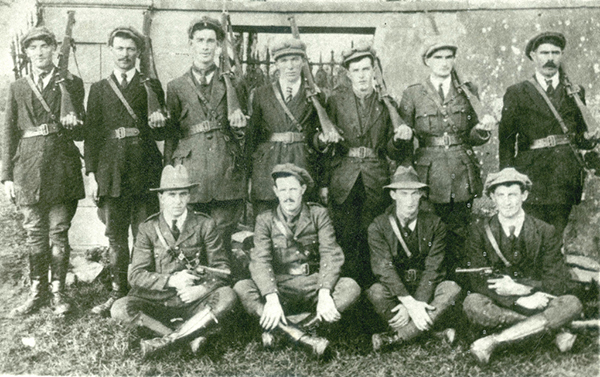 1920 was a year of profound importance in Ireland’s history. During this time of great challenges and strife, Cork City played a pivotal role in our country’s fight for freedom.
It has been Cork City Council’s aim to commemorate the centenary of 1920 to gain a deeper understanding of how Irish society has been shaped by our past, to walk for a moment in the footsteps of our ancestors and learn from the men and women of this era who fought for the freedom that we take for granted today.
Take a step back in time and watch the history of Cork come to life through video, imagery, behind the scenes tours and interviews. 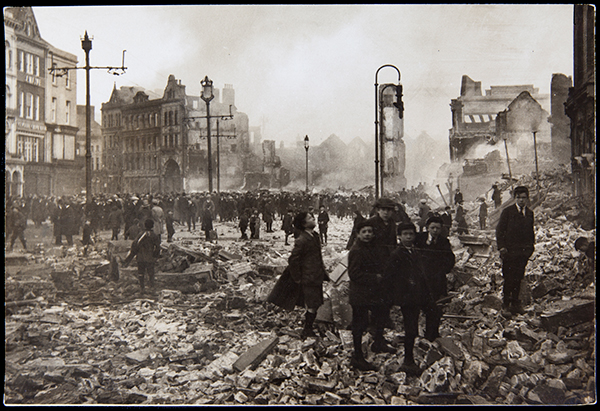 Eithne Coyle was from Donegal and was very active there during the War of Independence. 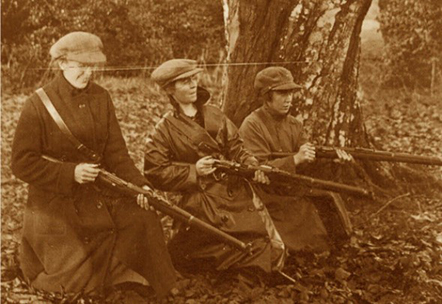 City Hall Dublin was occupied by Crown forces late in the War of Independence.

On 6 December 1920 the Tricolour was removed from the flagpole and soldiers placed barbed wire across the entrance. 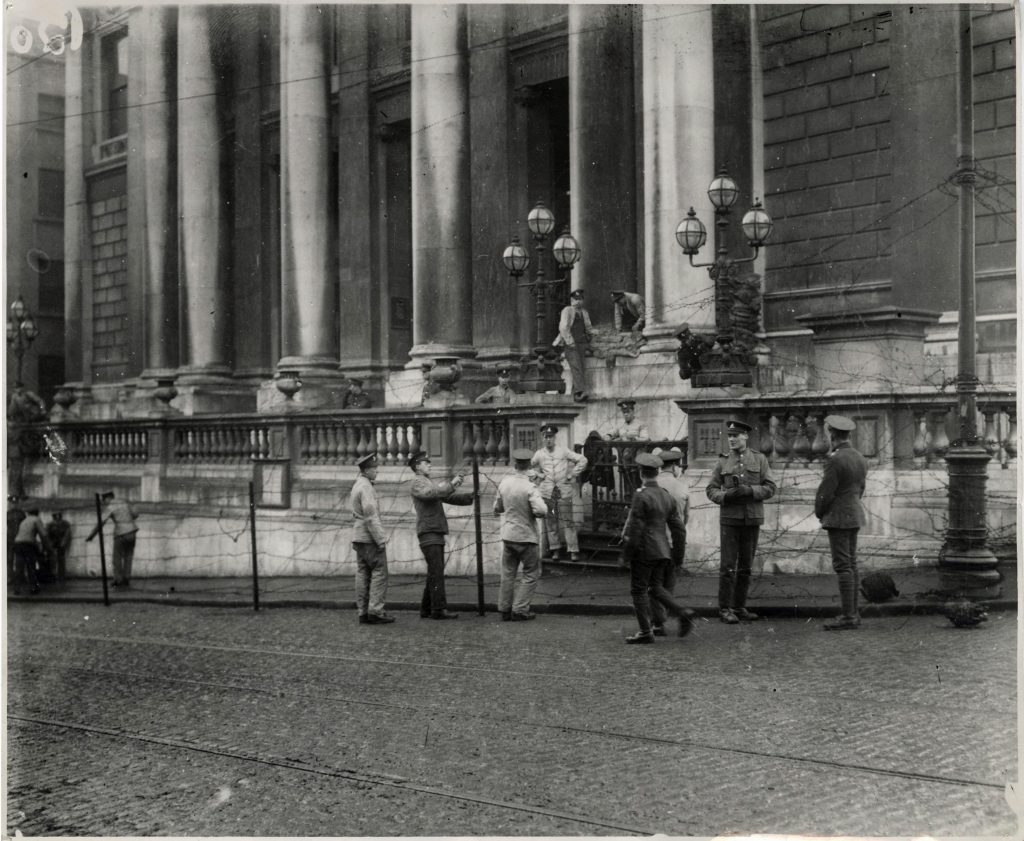 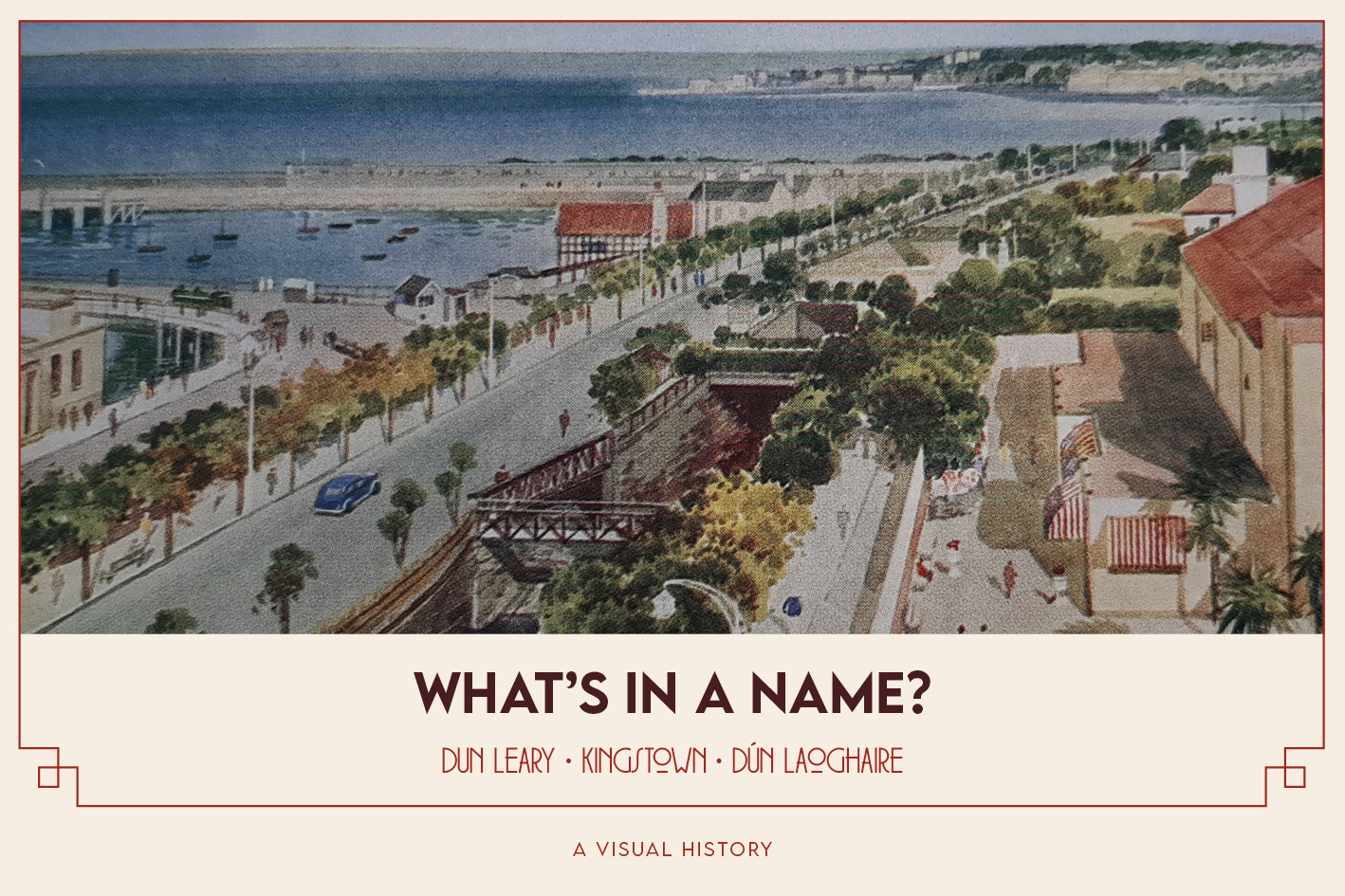 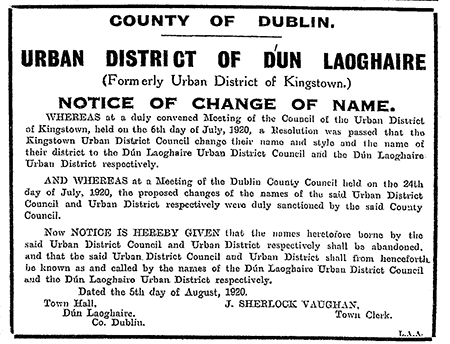 In 2020 Dún Laoghaire-Rathdown celebrates the centenary of the town's name change during the War of Independence.

In 1821 the name Dunleary or Dun Leary was changed to Kingstown in honour of George IV's visit to this bustling and rapidly developing town.

In 1920 it was officially given the name Dún Laoghaire, referring back to the original name - Dún (old fort) that belonged to a chieftain called Laoghaire.

This name change was a deliberate political act during the War of Independence.

The story is told through the medium of a large acquisition of postcards of the area held in the Local Studies Collection at dlr Libraries.

dlr Libraries acquired nearly 700 postcards of the Dún Laoghaire-Rathdown area from the sale of the Seamus Kearns Collection of Postcards in 2019.

These images form the basis of a publication entitled What’s in a Name? Dun Leary – Kingstown – Dún Laoghaire: A Visual History, an accompanying onsite and online exhibition featuring a selection of these postcards and a series of talks and videos to mark the centenary of the name change.

In addition, a Primary Schools resource featuring five Lesson Plans for teachers has been prepared by Séamus Cannon and Ríonach O Callaghan in association with Blackrock Education Centre.

These Lesson Plans cover topics such as the origin of Dún Laoghaire, Martello Towers, the derivation of Early Christian and more recent Dún Laoghaire-Rathdown placenames, royal connections and growth of the harbour. A link to these resources for teachers can be found *here*

Further information can be found *here*

The exhibition can be found *here* 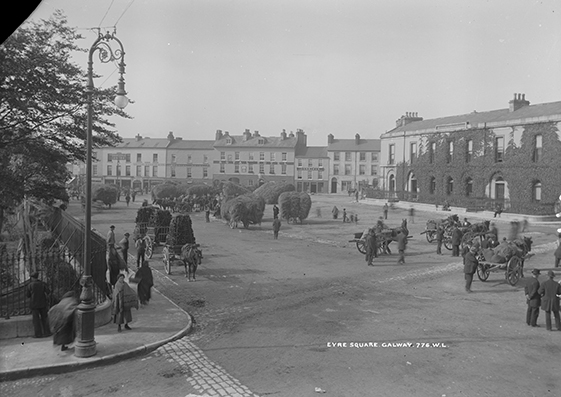 The Galway Volunteers taking command of the Athenry police barracks from the RIC, January 1922.

This photograph is a rare example of the Volunteers and the local RIC posing together following the end of the War of Independence. Captain Stephen Jordan of Athenry, (seated, fourth from the left in tunic), later a TD, took command of the Athenry Barracks upon the disbandment of the RIC.

The Black and Tans had departed the barracks the previous night, smashing the windows and damaging the interior of the building, however, the Volunteers and the local RIC were happy to pose together.

Under the Decade of Centenaries programme, Kerry County Council have produced a comprehensive list of sources, focusing in particular on the Irish War of Independence. 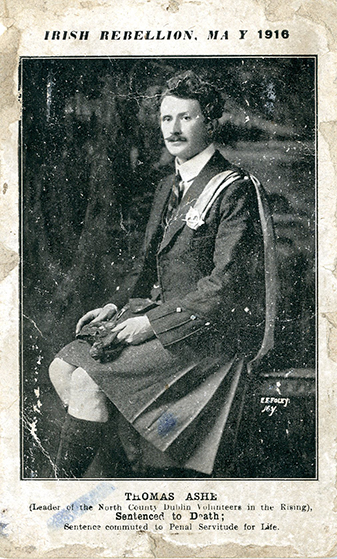 In November 1920, the RIC and British Military entered this building just as the monthly meeting of Kildare County Council was about to begin.

They seized financial records, correspondence with Dáil Éireann and the council minute book from the Courthouse. 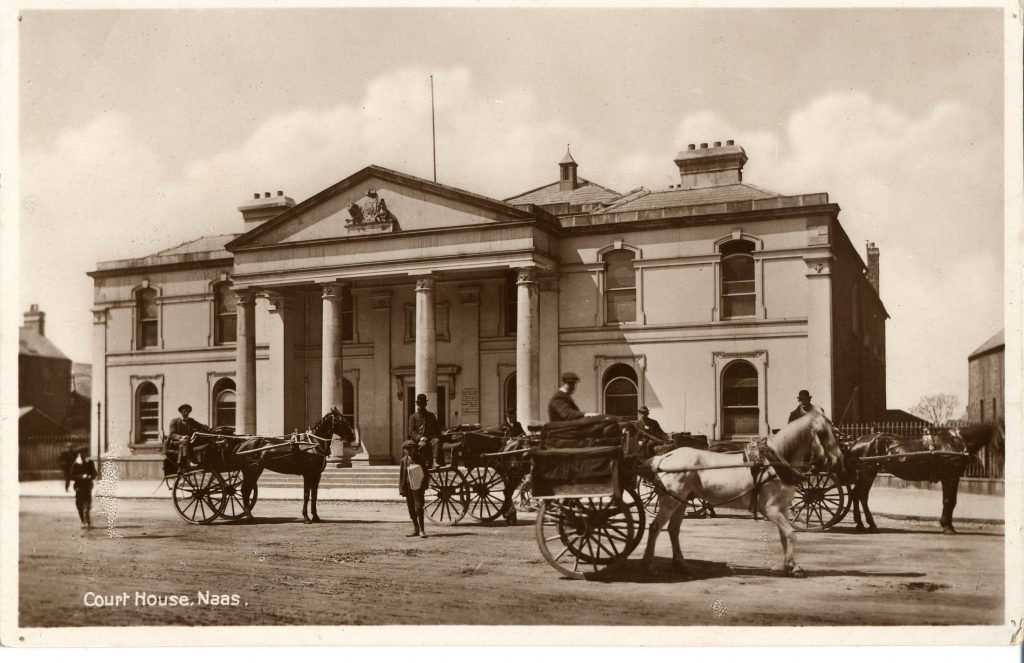 Hugginstown RIC outside the barracks in the years prior to 1920 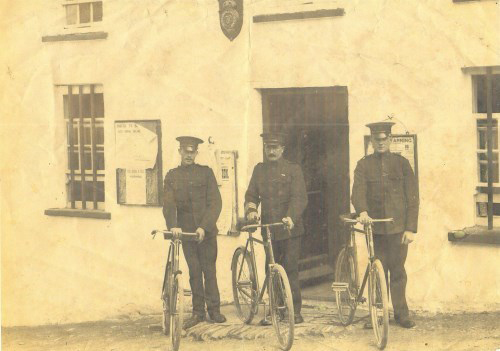 During the Limerick Soviet, all people travelling in and out of the city centre had to obtain permits from the military and show them to British soldiers at checkpoints on all roads into Limerick. 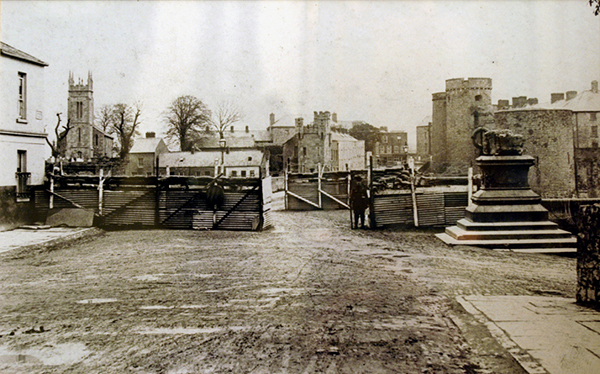 Campaigning for Joseph McGuinness in the South Longford  by-election, 1917

(The McGuinness Collection,courtesy of Richard Callanan) 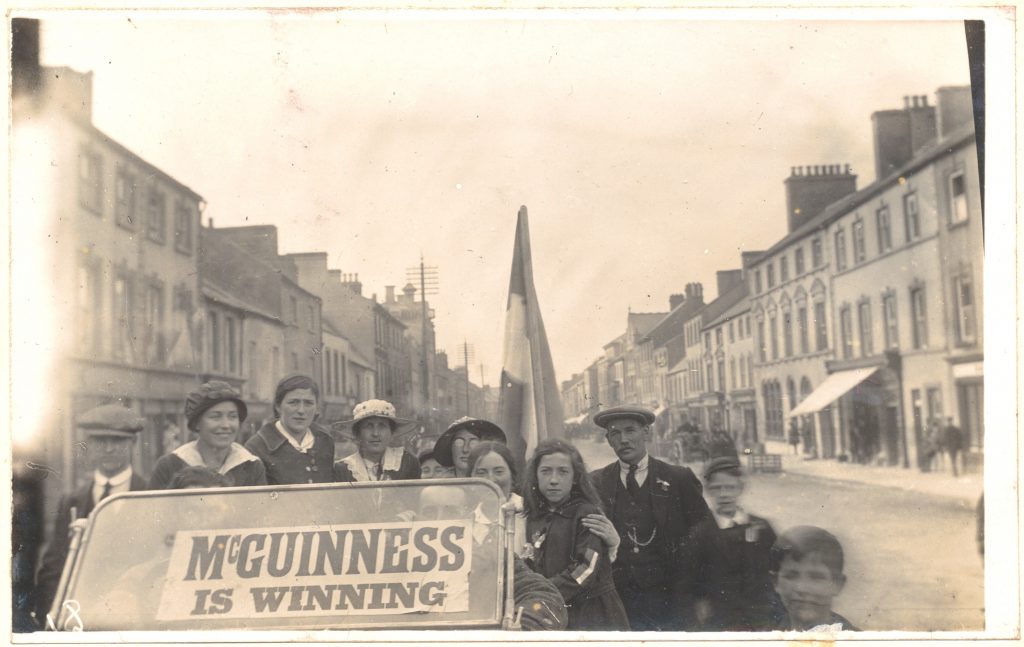 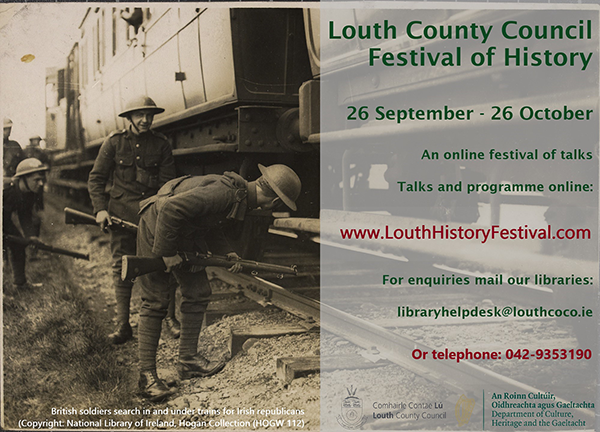 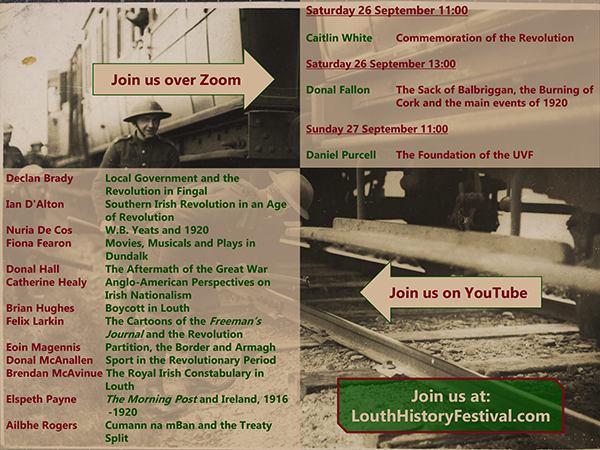 Trim, September 1920 is published on the centenary of the tumultuous events which occurred in the town of Trim a century ago, and forms part of County Meath’s Decade of Centenaries commemorations.

By presenting contemporary accounts, documents, photographs and newspaper reports, it is hoped that this book will contribute to and deepen our understanding of our history. 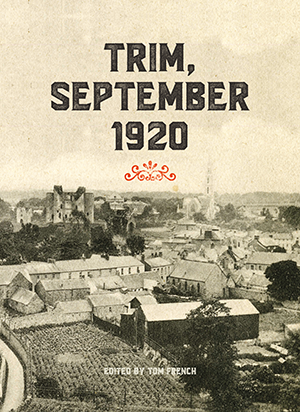 Dan Hogan, the eldest son of a wealthy farmer from Grangemockler in Co Tipperary, was born in 1895. In 1917, he came to Clones, Co Monaghan, as a clerk with the Great Northern Railway. There, through his involvement in the Clones GAA club, Hogan met Eoin O’Duffy. They became firm friends and Hogan soon became O’Duffy’s right hand man in both the GAA and Volunteers.

Hogan was ruthless when necessary, it seems more so after his brother Michael’s death in Croke Park on Bloody Sunday 1920 when playing for Tipperary against Dublin. Perhaps it was no coincidence that the eight months after Bloody Sunday were the most violent period of the conflict in Monaghan.

Dan Hogan is pictured sitting outside Lough Bawn House in Monaghan, just after the Truce in July 1921. He had just been appointed Commandant of the IRA's 5th Northern Division, which included Co Monaghan. The 'Tommy Gun' he is holding is one of a small number, which were smuggled into Ireland and sent round the country by the IRA for photo opportunities. 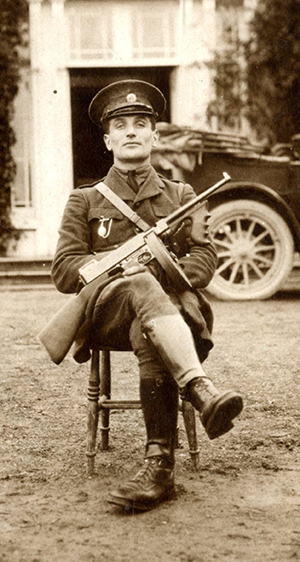 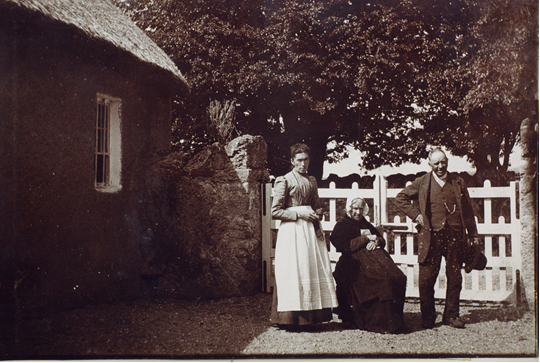 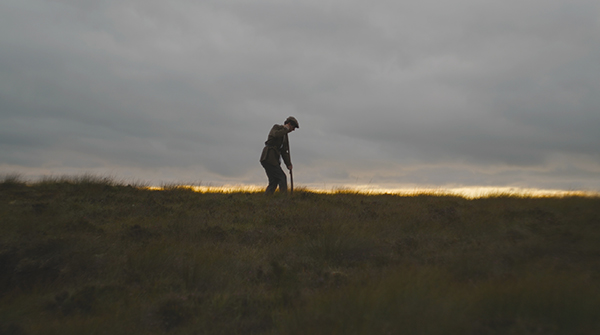 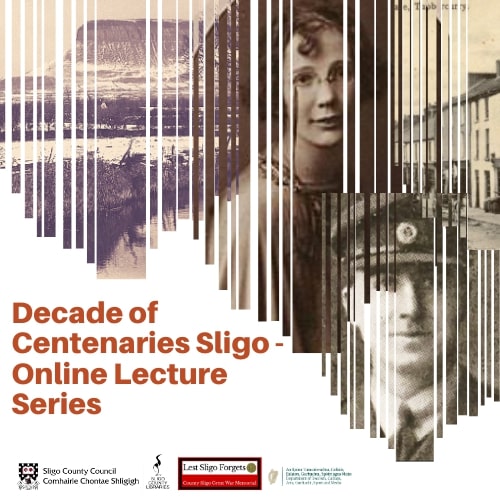 South Dublin Libraries is delighted to present this lecture series as part of our Decade of Centenaries programme, supported by the Department of Tourism, Culture, Arts, Gaeltacht, Sport and Media.

The lectures will take place online via Zoom every Thursday evening in November at 7:00pm.

All events are free of charge and booking is essential at ballyroanlibrary.eventbrite.ie. 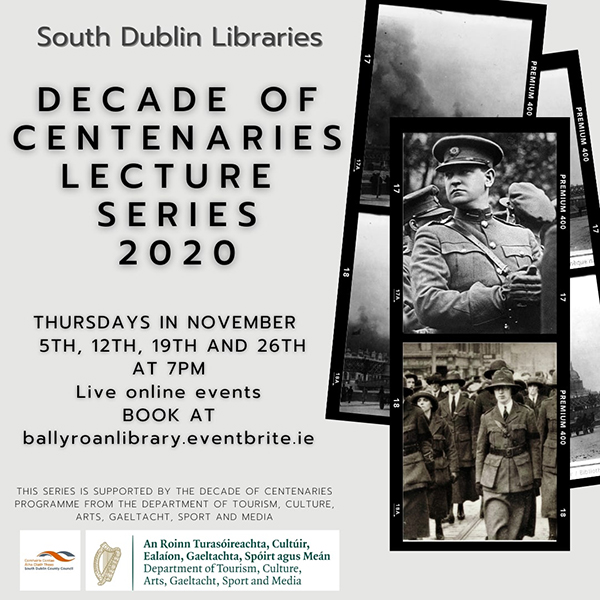 The ‘Hogan Jersey’ part of the Tipperary Museum of Hidden History collection. 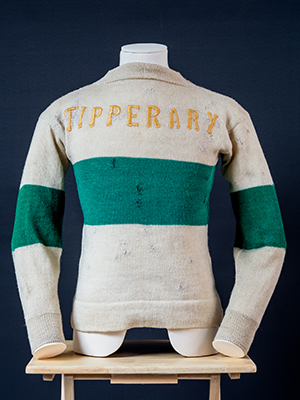 Image: Memorial in Piltown to the Volunteers of the West Waterford IRA of 1920

ONLINE TALKS SERIES: Waterford in 1920
As part of its Decade of Centenaries events Waterford City and County Council is delighted to make available this series of talks exploring 1920 in Waterford and the voices that were fighting to be heard in the creation of a new Ireland ... an independent Ireland.

Waterford and the 1920 Local Elections: Fighting for a Voice and a new Ireland 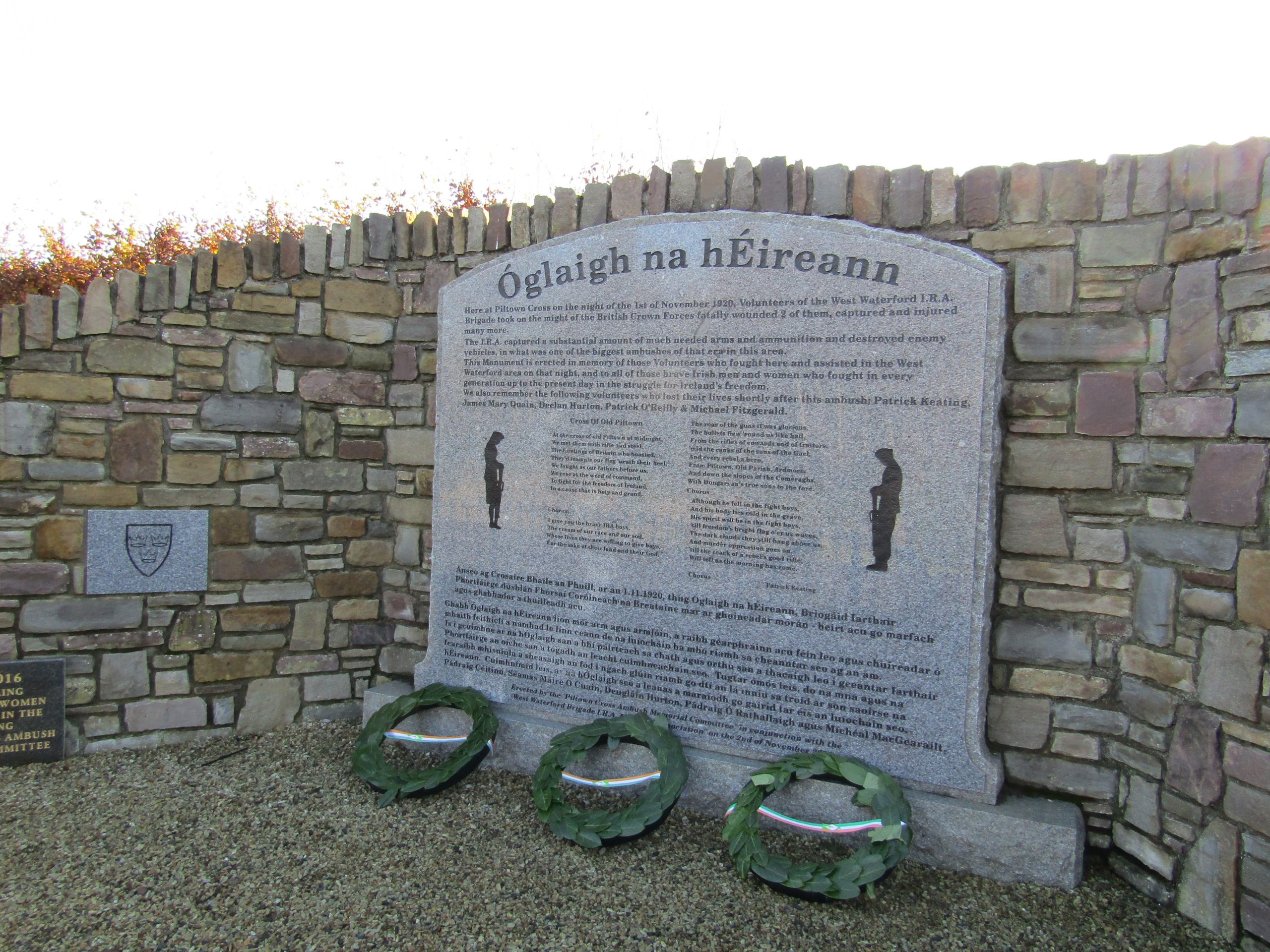 A road-block on the bridge of Athlone c 1921. The vehicle is a British Peerless armoured car.

The Union Jack can be seen flying above Athlone Castle which was then part of the nearby Army Barracks.

As part of the Westmeath County Council Decade of Centenaries programme, Ian Kenneally has been appointed Historian in Residence for the period from August until November 2020.

A new blog detailing events that took place in Westmeath in this period can be accessed *here*. 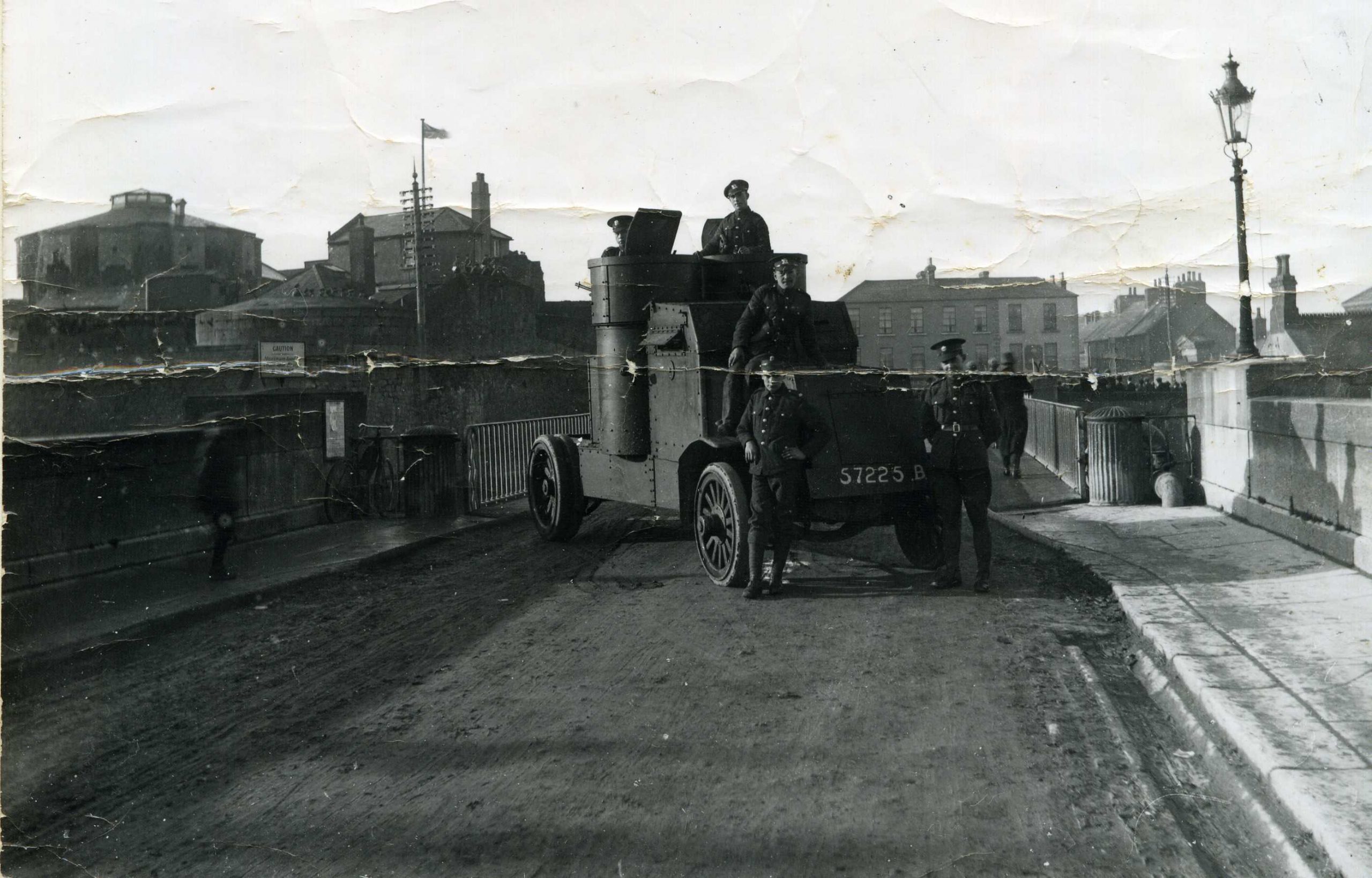 Courtesy of the Nicholas Furlong Collection 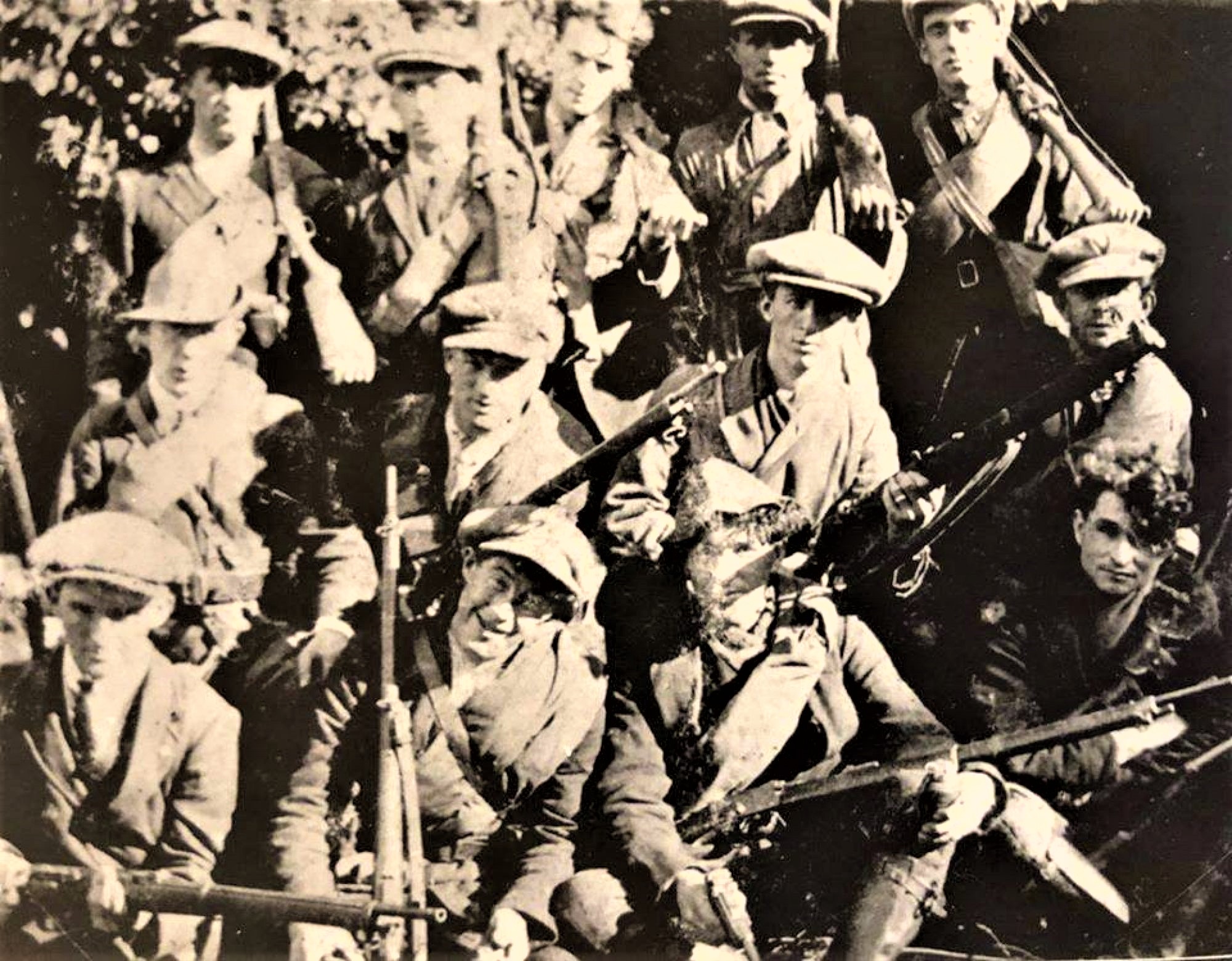 This Wicklow Decade of Centenaries project features articles from Wicklow historians working across the county, describing this tumultuous period in our history and capturing local information and human stories 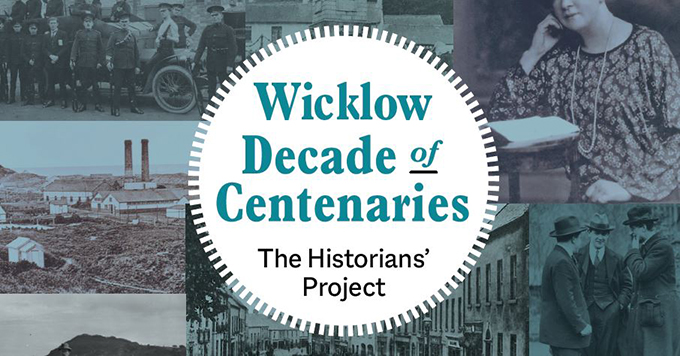