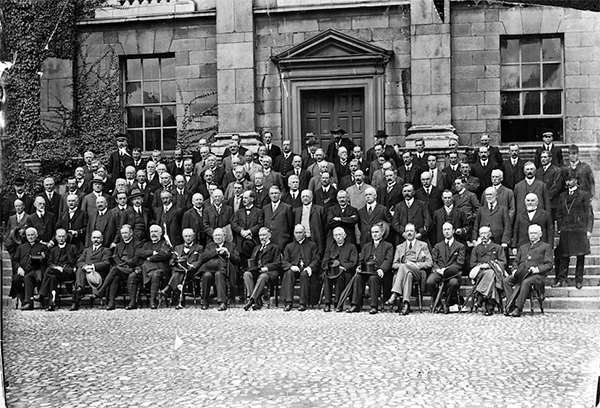 Previously hidden aspects of the Church of Ireland’s input and influence on the Irish Convention which opened in Trinity College Dublin in July 1917, are brought to light in a new online exhibition from the Representative Church Body Library (the Church’s record repository and reference library), entitled ‘”Good wishes for the great adventure”: The Church of Ireland and the Irish Convention’.

The Irish Convention is significant because it would be the last all-Ireland political negotiations to find a solution to the ‘Irish question’ before partition in 1921. By initiating a gathering of Irishmen to decide their own political destiny, the British Government’s ostensible objective was to keep nationalist and unionist Ireland together as a single political entity (albeit at this point within the British Empire). The British Government invited the two Church of Ireland archbishops of Armagh and Dublin – John Baptist Crozier and John Henry Bernard – to attend the convention. Additionally the Roman Catholic hierarchy was represented by the Archbishop of Cashel and three other bishops – of Down, Raphoe and Ross – and the Presbyterian Church in Ireland by its Moderator. Once in session, the proceedings of the Convention were strictly secular – there were no prayers or religious formalities as part of the proceedings. Nevertheless, the juxtaposition of the church leaders among the political leaders in the front row of the official photograph that appeared in August 1917 signals how significant their input was considered to be in political circles.

The exhibition draws on the rich resources of the weekly Church of Ireland Gazette, now digitized and freely searchable online between 1890 and 1923, for insight to what could be considered as the moderate and middle–ground opinion being written and read by its members and others during this period. The exhibition is supprted by the Department of Culture, Heritage and the Gaeltacht, who have also supported the online hosting of the Church of Ireland Gazette (available in complete hardcopy format in the library from 1856 to the present), which is free to search online from 1890 to 1923 here, while the online exhibit featuring selected materials from the Gazette and other items, including correspondence between Sir Horace Plunkett and Rosamond Stephen (the library’s founding benefactor) is available to view here.