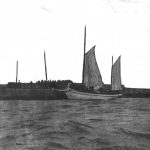 Beginning on Thursday 9 October 2014, Pat Murphy of the ASGARD 100 group gave a series of lecture on the Howth- gun-running and the Asgard; the group were involved in arranging the renovation of a replica of the Asgard’s original dinghy, which was used in the centenary of the Howth gun-running before being presented to the National Museum of Ireland. The full list of lectures was:

Click here for details of the Asgard commemoration on 27 July 2014.

Learn about the National Museum of Ireland’s Asgard exhibition.