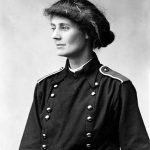 Richmond Barracks have developed a new online exhibition entitled “You never saw such excitement”: The 1918 Election of Countess Markievicz, in partnership with Google Arts and Culture.  This exhibition focuses on the two year period following the release of Countess Markievicz from Aylesbury Prison in June 1917 to her appointment as Minister for Labour in April 2019, using images, film footage and voiceovers to convey the historic election campaign that was successful in electing the first female MP to the UK Parliament in the St. Patrick’s Ward of Dublin. Video clips of interviews with Mary McAuliffe (UCD) and Micheline Sheehy Skeffington (NUI Galway) address the contemporary issue of women’s representation in all aspects of public life.