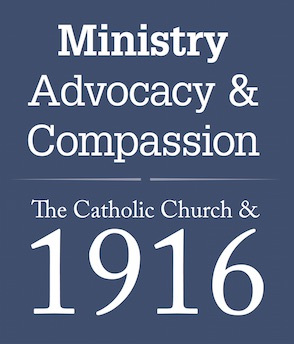 On Friday 23 September 2016 Minister for Education Richard Bruton TD and the Roman Catholic Archbishop of Dublin, Diarmaid Martin, launched a new audio-visual exhibition on the role of Catholic priests and nuns in the 1916 Rising in Dublin’s Pro-Cathedral. Ministry, advocacy and compassion compiles newly–released documents and relics from 10 different religious archives to form a collection that tells the unique story of the clergy as they aided the injured, fed the hungry, and ministered the sacraments to the imprisoned leaders awaiting execution.

On display for the first time are letters relating to Patrick Pearse, General John Maxwell, Archbishop William Walsh, Joseph Mary Plunkett, British Prime Minister Herbert Asquith, Seán T. Ó Ceallaigh and more, alongside the chalice and paten used during all religious ceremonies in Kilmainham Gaol. An extensive library of digitized material from the Dublin Diocesan Archive and Irish Capuchin Archives can be accessed on the interactive touchscreen unit, while an audio player will also relate the experiences of five key witnesses. The exhibition is open to the public from Saturday 24 September, 1.30–5.30pm every day in St. Kevin’s Oratory, Pro–Cathedral, Marlborough Street, Dublin 1. Admission is free. Follow this link to learn more about the exhibition.

From Century Ireland: The Catholic Church and the Easter Rising.