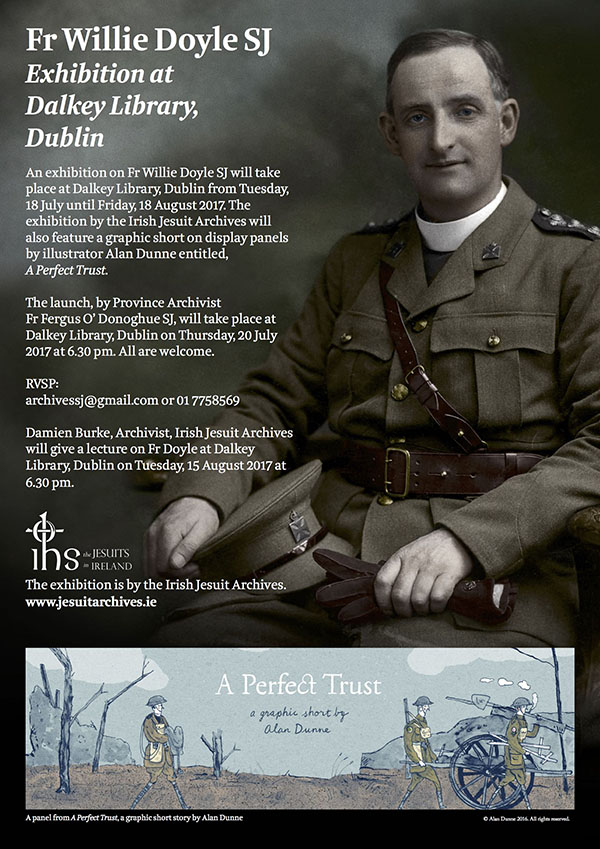 From 18 July to 18 August 2017 Dalkey Library, Co. Dublin, will host an exhibition on the life of Fr. Willie Doyle SJ (1873-1917), developed by the Irish Jesuit Archives. William Joseph Gabriel Doyle was born on 3rMarch 1873 at Melrose, Dalkey Avenue, Dalkey, county Dublin. He was the youngest of seven children of Hugh Doyle, registrar of the insolvency court, and Christine Doyle (née Byrne). Educated at Ratcliffe College, Leicestershire, in 1891 Willie followed his older brother Charles into the Jesuits. After two years as a novice, he taught at Clongowes Wood College, where he founded the school magazine, The Clongownian. His Jesuit formation included periods in Belgium and England, and further teaching at both Clongowes and Belvedere Colleges. After his ordination at Milltown Park on 28 July 1907, Doyle began work as an urban missionary and retreat giver in Ireland, travelling throughout Ireland and Britain. He was also the author of a number of best-selling pamphlets on retreats and vocations.

Volunteering as a military chaplain in the First World War, Fr Doyle was sent to France with the Royal Irish Fusiliers in early 1916, being described by one officer as ‘one of the finest fellows that I ever met, utterly fearless, always with a cheery word on his lips and ever ready to go out and attend the wounded and the dying under the heaviest fire’. Having been present at the battles of the Somme and Messines, Fr Doyle was killed during the third battle of Ypres on 16 August 1917, while going to the aid of a wounded man near Frezenberg. He is commemorated on the Tyne Cot memorial, Belgium. Fr Doyle was awarded the Military Cross, and was posthumously, but unsuccessfully, nominated for the Victoria Cross.

The exhibition on his life will also feature a graphic short by illustrator Alan Dunne, entitled A perfect trust. Damien Burke, archivist at the Irish Jesuit Archives, will give a lecture on Fr Doyle at Dalkey Library, Dublin on Tuesday, 15 August 2017 at 6.30 pm, and the Province Archivist, Fr Fergus O’ Donoghue SJ, will launch the exhibition on Thursday, 20 July 2017 at 6.30 pm, Dalkey Library, Dublin. All are welcome to both events: RVSP archivessj@gmail.com or 01-7758569.

Post Views: 152
Posted in Editor's Blog, Ireland and the World