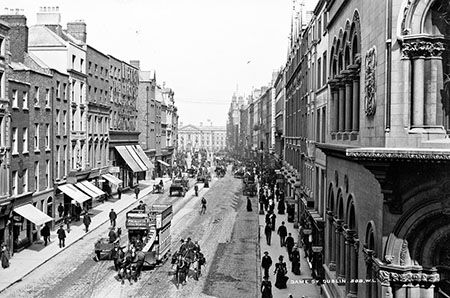 Dublin in 1918 was a recent series from north Dublin’s Near FM that explored life in the Irish capital a century ago. Presented by Ciarán Murray and Donie Tarrant, the three episodes of the series were recorded live in Coolock and Raheny public libraries, with participants including members of the the Dublin City Council Historians in Residence programme. The first episode, with Maeve Casserly and Ida Milne, explored disease and hunger in 1918; in the second episode Cormac Moore explored sport, entertainment and politics; and the third episode, recorded in Raheny library, explored tenement life in Dublin in 1918 with Richard McElligott, Donal Fallon and Cathy Scuffil.

Dublin in 1918 was supported by the Broadcasting Authority of Ireland’s ‘Sound and vision’ scheme. The entire series is available to stream or download here.