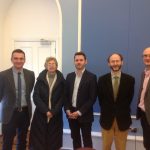 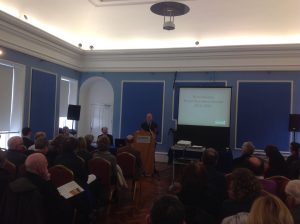 Prof. Horne opened the conference by discussing how a global war of unprecedented scale, imbued with deep historical significance and which led to the geo-political reorganisation of much of the world was interpreted in a diverse range of settings. The war was remembered at individual and collective level; from the perspective of the soldiers who had fought in it, to that of the states who had participated in it. The ‘Great War’ was seen as pivotal to national history in virtually all countries affected by it. A notable exception was the Soviet Union, which had emerged in the aftermath of the defeat of the Russia Empire. The manner in which the war was elided from the official culture of the Soviet Union was the subject of Dr. Devlin’s lecture. Dr Madigan returned to the theme of remembrance, and dealt with the manner in which the First World War has played a role in British life. He also discussed the commemorative programme being outlined by the UK government, which at state level will focus on the centenaries of six key events: the British entry into the war; the Gallipoli landings; the battles of Jutland, the Somme, and Ypres; and finally the armistice that concluded the war.

In the final session, William Blair and Lar Joye also provided details of forthcoming exhibitions to be hosted by National Museums Northern Ireland and the National Museum of Ireland, dealing with the Irish experience of the First World War.

To read John Horne’s ‘Commemorating the centenary of the Great War and the division of Ireland: A European perspective (2011)’, click here.

Post Views: 94
Posted in 2014 events, Dublin, Ireland and the World, National Museum, Past, World War One