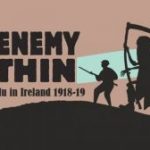 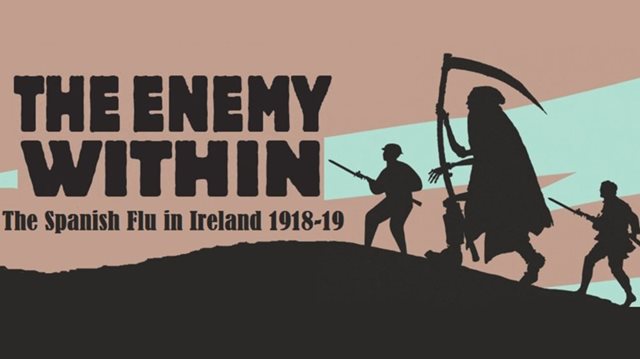 From September 2018 onwards the National Museum of Ireland’s ‘Decade of Centenaries’ programme will focus on the ‘Spanish Flu’ pandemic of 1918-19. Traditionally overlooked in the history of the revolutionary period, the impact of the pandemic on Ireland has in recent years, attracted greater attention from historians.

The pandemic emerged in the latter months of the First World War, and was transported across the globe as armies demobilised on an unprecedented scale following the end of the war. The disease itself was a particularly virulent strain of avian flu that had made the transition to humans, and may have killed as many as 100 million worldwide. In Ireland the pandemic came in three waves in late 1918 and early 1919, causing immense disruption across society as perhaps 800,000 Irish people were infected; over 20,000 died.

The National Museum’s centenary commemorative project, entitled The enemy within: The Spanish Flu in Ireland, 1918-19, will include a temporary exhibition at the National Museum of Ireland – Country Life, running until May 2019; and an online public participation programme.

The exhibition will run from September 11, 2018, to April 2019 at Turlough Park in Castlebar and will focus on the folk medicines and rudimentary cures used by the public to combat the flu a century ago.  The public participation element of the programme will allow students, communities and individuals across the island of Ireland to share and archive their Spanish Flu stories on the website, OurIrishHeritage.org. Our Irish Heritage is the home of the Irish Community Archive Network (iCAN), a project supported by the National Museum of Ireland. Stories submitted by the public will be linked to an online interactive map of Ireland, which will allow a global audience to view Irish experiences of the Spanish Flu.

Read Guy Beiner, Patricia Marsh, and Ida Milne’s History Ireland article on ‘the greatest killer of the twentieth century’, and listen to the same authors take part in a recent History Ireland Hedge School on the Spanish Flu pandemic.