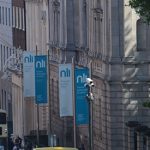 Europeana (Europe’s digital library, museum and archive), in conjunction with Oxford University, is building the first ever online European archive of private stories and documents from World War One in time for the 100th anniversary of the outbreak of the war in 1914, at www.europeana1914-1918.eu.

At a collection roadshow at the National Library on 21 March, hundreds of people contributed to this online archive, bringing their precious items and memories to be catalogued, digitised, and uploaded to the archive. Visitors from all around Ireland shared photographs, letters, postcards, medals, coins, keepsakes, diaries, sketches, army discharge papers – and even helmets marked by shrapnel. The large crowds were entertained by songs of WWI, and eagerly discussed their family treasures with military historians and other experts.

Material can be submitted into the archive. Just scan or digitally photograph items, and upload them to www.europeana1914-1918.eu, where there is also a step-by-step guide to the process. All the items photographed at the roadshow, and the stories associated with it, are available to view on the Europeana website.

The National Library roadshow is one of a number that took place in the UK, Luxembourg, Slovenia, Denmark, Belgium and Ireland in 2012, helping to create a unique pan-European virtual archive of World War One that is available to everyone. The project has proven hugely successful in Germany and in the UK, where it was led by Oxford University. The University continues to lead the project in terms of digital training and cataloguing expertise for Europeana roadshow events across Europe.

In 2011, more than 25,000 digital images were recorded from nine family history roadshows held in major cities across Germany. Among the images scanned and digitised were unpublished diaries, hand-drawn maps, portraits, sketches and photographs recording life under fire and on the home front.

The Europeana 1914-1918 project will give universities, colleges, museums, galleries, archives, libraries, the creative industries and schools the opportunity to work together with the public to create new and exciting ways of considering the historical, political and social legacy of the World War One through innovative digital technologies.

The Europeana Roadshow was also held at the Hunt Museum in Limerick on 5 November 2012. For further information, click here.