‘O’Duffy gave orders to light the fuse. The explosion went off successfully.
There was a shower of slates and paper floating over the area’. The Monaghan Brigade of the IRA, under the command of Eoin O’Duffy, who successfully attacked a Royal Irish Constabulary Barracks at Ballytrain, south west Monaghan in the early morning of Sunday, February 15 th 1920, marked the beginning of hostilities in Monaghan. The War of Independence had already begun in many parts of the country but when the IRA successfully attacked the first RIC
Barracks north of the Boyne, the national news it created made a household name of O’Duffy and opened a new theatre of operations in a conflict that would reach every community in the county. 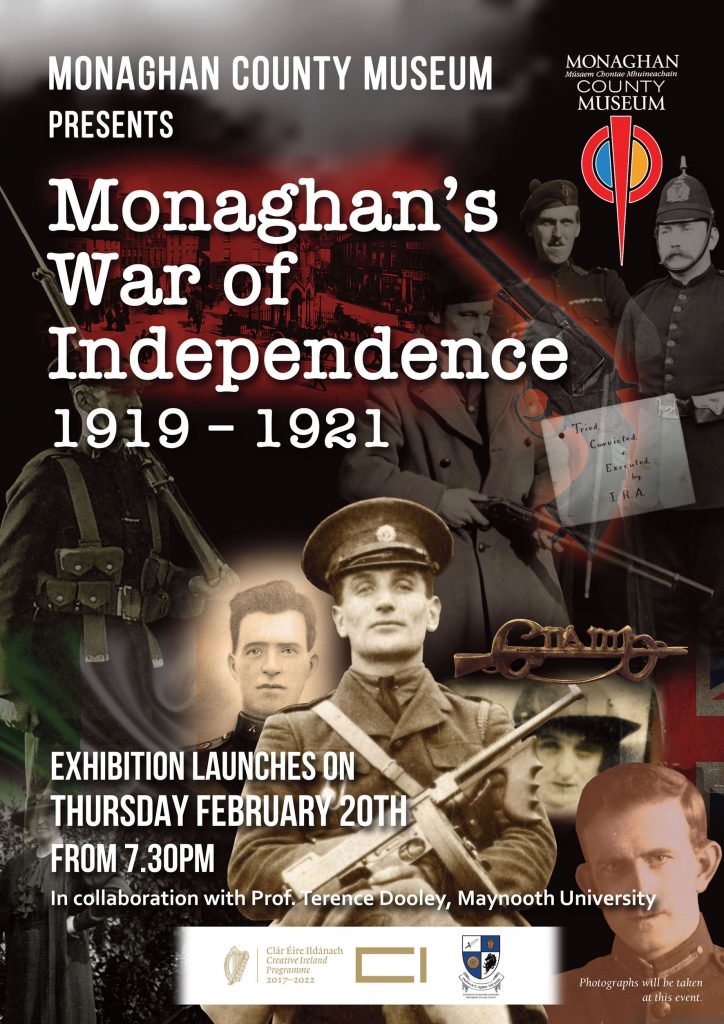 Working in collaboration with Professor Terence Dooley of Maynooth University, Monaghan County Museum presents it’s thrilling new exhibition Monaghan’s War of Independence 1919 – 1921. Using stunning imagery, objects, film and first-hand accounts as well as new research into the history of the conflict in Monaghan. This new and important investigation into what happened in the county during those fateful years reveals a tale, which is more than just a struggle between the IRA and the British forces for control of the county. Stories
such as the impact of the conflict on the local population – men and women, sectarianism due to Monaghan’s proximity with the Unionist majority counties in Ulster as well as land issues all played a part in the history of the War of Independence in Monaghan.

The exhibition includes a number of never before seen key objects and displays that will enthrall visitors as they explore this fascinating exhibit. The exhibition will also have a booklet with additional information that will be available from the museum but also as a download on the museum’s website.

Exhibition will launch on Thursday, February 20th from 7:30pm