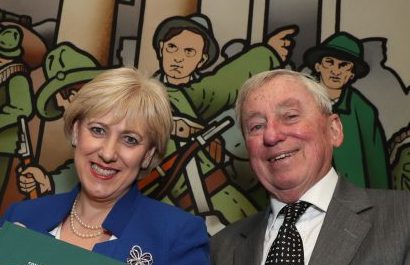 On 18 October 2017 Heather Humphreys T.D., Minister for Culture, Heritage and the Gaeltacht announced the second ‘Statement of Principles’ by the Expert Advisory Group to the Government on Commemorations and launched a Public Consultation Process to assist in framing the Government’s commemorative programme throughout the years 2017-23.  This process includes how the events which led to the foundation of the state, including the Civil War, might be meaningfully and appropriately commemorated.

Speaking the launch of Centenary, edited by Ronan McGreevy, she said ‘the Advisory Group’s Second Statement of Principles will be a key support to the Government as it frames the State commemorative programme over the next five years.  It will also be a highly significant document for all interested parties currently reflecting on how the challenging historical events, which led to the Foundation of the State, might be meaningfully and sensitively commemorated”.

Dr Maurice Manning, Chairman of the Expert Advisory Group, added ‘it is important that the sense of inclusiveness and historical authenticity, which characterized the first phase of the Decade of Centenaries and which ensured the credibility of the commemorations, be continued into the arguably more sensitive and potentially divisive second phase.  To that end, the Expert Advisory Group is initiating public consultations to ensure that all points of view and all traditions are recognised and respected’.