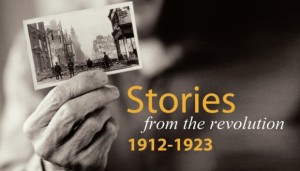 On 2 April 2013 The Irish Times published the third in its series of ‘Century’ special supplements, with the support of the Department of Arts, Heritage and the Gaeltacht. The supplement was entitled Stories from the Revolution, and as Patrick Smyth noted in his introduction, it consisted of ‘a miscellany of mostly unrelated individual tales of how the courses of ordinary people’s lives were transformed by extraordinary times’.

The stories themselves dealt with individuals from a variety of backgrounds and tradition: men, women, nationalists, unionists, trade unionists, members of the RIC, Irish soldiers, republicans, and victims of the conflicts that were an integral part of the revolutionary period.

Stories from the Revolution is available online  here.