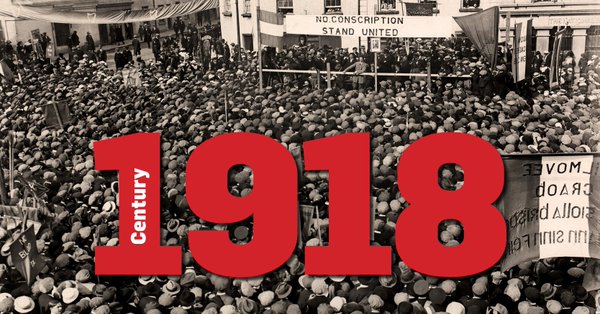 On 24 April 2018 The Irish Times published the latest in its ongoing series of supplements on the Decade of Centenaries, entitled 1918: Empires fall, nations rise.   Edited by Ruadhán Mac Cormaic and Ronan McGreevy, the supplement covers the critical events of 1918 both in Ireland and overseas: the German Spring Offensive and the resultant conscription crisis in Ireland, the ‘Spanish Flu’ pandemic, the end of the First Word War and the December 1918 general election that confirmed the new political ascendancy of Sinn Féin. As the editors note in their introduction, ‘the war’s final months played out against a background of domestic upheaval…In Ireland as in the rest of Europe, war acted as a catalyst of social and political change’. But equally, ‘across Europe, the war radicalised politics…communism, nationalism, liberal democracy and socialism would face off in the inter-war years, and as soon as the fighting ended, new geopolitical convulsions began’. Contributors to the supplement include John Horne, Alvin Jackson, Ida Milne, Conor Mulvagh, Margaret Ward, and Pádraig Yeates.

1918: Empires fall, nations rise was supported by the Department of Culture Heritage and the Gaeltacht and can be read online here.