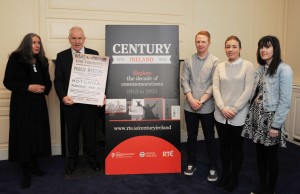 On 12 November 2013 Jimmy Deenihan T.D., Minister for Arts, Heritage and the Gaeltacht, officially launched a special edition of Century Ireland to mark the centenary of the formation of the Irish Volunteers at a meeting held at the Rotunda, Dublin, on 25 November 1913.

The formation of the Volunteers was a milestone moment in a tumultuous decade: coming in the wake of the establishment of the Ulster Volunteer Force, on which it was modelled but whose objectives it opposed, the emergence of the Irish Volunteers signalled the beginning of the militarisation of nationalist Ireland.

Century Ireland is covering this ground-breaking event through news reports, reproductions of key historical documents, fresh historical analysis and filmed interviews from the RTÉ Archives with actual participants in the Rotunda meeting, including Seán T. O’Kelly, future President of Ireland.

Century Ireland is an online news service and digital resource for information and analysis on the events that shaped Irish life from the time of the Home Rule debate, through World War 1 and the Easter Rising of 1916, up to the civil war. Launched in May this year, Century Ireland is published fortnightly with a daily blog and twitter feed. Through news reports, historical documents, photographs and academic analysis, it tracks the Irish — and international — experience day by day, week by week, month by month, year by year. Supported by the Department of Arts, Heritage and the Gaeltacht, Century Ireland is a partnership between RTÉ, Boston College, the National Cultural Institutions and other partners.

At the launch, Minister Deenihan said that  ‘when formed to aid the push for Home Rule a century ago, the Irish Volunteers encompassed the broad spectrum of Nationalist opinion in Ireland.  Joined by a common desire for national self-determination, the Irish Volunteers attracted members of the IRB, the ICA, Sinn Féin, the Gaelic League and Cumann na mBan. These men and women would go on to play an integral part in the major events of the decade which we are now commemorating, including the First World War, the 1916 Rising and the War of Independence.’

‘Century Ireland gives us a great insight into not only the political developments of the time but also the social and living conditions of the era. This is a rich period in Ireland’s story, and I hope that people engage with Century Ireland and learn more about the events which shaped modern Ireland.’

Professor Mike Cronin of Boston College observed that ‘the formation of the Irish Volunteers is a defining moment in Irish history as it marks the organisation of nationalists opposed to the unionists’ intransigent attitude towards the passage of the Home Rule Bill. At the heart of the Volunteer movement were a range of individuals who would be key during the revolutionary era, and many others who would serve during the First World War.’

‘The Volunteer issue of Century Ireland continues the work that is being done to showcase these key political developments alongside the working and social lives of the ordinary Irish person. Through the use of online technologies and archival material from our National Cultural Institutions, the project aims to bring the period to life in an exciting and accessible manner. Century Ireland is a project for anyone with an interest in how Ireland was shaped by the tumultuous events of the 1913 to 1921 decade and our partnership with RTÉ has ensured that it is freely available to the widest possible audience.’