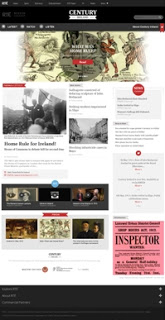 On Tuesday 7 May 2013 Jimmy Deenihan TD, Minister for Arts, Heritage and the Gaeltacht, officially launched Century Ireland, a major new online news service which will chart both ground-breaking and everyday news events which took place from the time of the Home Rule debate to the Civil War (1913 to 1923). Century Ireland is a partnership between RTÉ, the Department of Arts, Heritage and the Gaeltacht, Boston College, the National Cultural Institutions and other partners.

Century Ireland will make a range of archival material available to the public in the most accessible way possible, and will accompany this material with expert commentary. Alongside news reports from the time, the site will feature primary sources, academic research, and a wealth of visual imagery. The reach of the Century Ireland online news site will also be complemented with a daily blog and Twitter feed to bring information about the 1913 to 1923 period to the widest possible audience in the most easily accessible way.

Minister Deenihan observed that ‘over the course of 2013, and in the decade ahead, we will celebrate a rolling succession of centenaries that mark the most momentous period in modern Irish history. In a mere decade, the social and political landscape in Ireland changed completely. The Century Ireland initiative is important because it takes our history and makes it tangible and accessible for the audience of today. The major stories featured will explain the events that shaped modern Ireland, but the everyday ones will help us imagine what it was really like to live through this decade of change.

Professor Mike Cronin of Boston College explained that ‘Century Ireland offers a decade long history of the major and everyday news events from a hundred years ago. Produced by Boston College, delivered by RTÉ and supported by the national cultural institutions, Century Ireland will bring the 1913-23 period to life. A rich mix of digital content, supported by social media, will allow the public to access a range of material and lead them through the decade of centenaries in real time’.

With regard to RTÉ’s involvement, Noel Curran, Director General of RTÉ, commented that ‘RTÉs involvement in the Century Ireland project is reflective of its commitment to opening up and showcasing some of the wealth of materials available within the RTÉ Archive. Online and mobile engagement nationally and internationally increases every year and we feel confident Century Ireland’s positioning within the RTÉ.ie website will help this project secure the recognition and visits that it truly deserves. It has been a privilege to have worked in partnership with such esteemed organisations to create a national cultural resource of such quality and value’.