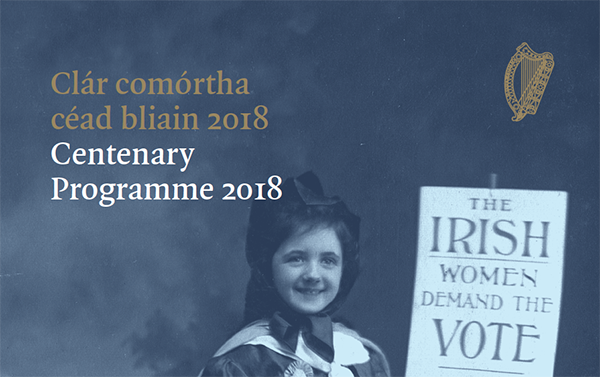 On Wednesday 6 February 2018 the official 2018 Centenary Programme was launched by Josepha Madigan TD, Minister for Arts, Heritage and the Gaeltacht, in Marlay House, Rathfarnham, Dublin 16. The 2018 programme places great emphasis on social and political change, including the extension of the electoral franchise by the Representation of the People Act (the programme was launched on the centenary of its passage through the Westminster parliament), the death of John Redmond, the 1918 campaign against conscription, the ending of the First World War, and the electoral landslide of December 1918 that established Sinn Féin as the dominant Irish nationalist party of the immediate post-war era. A diverse range of events and initiatives are planned with the involvement of the Oireachtas, the National Cultural Institutions, and the Department of Foreign Affairs and Trade. Full details of events will be listed here as they arise, but in the meantime, you can read or download the full text of the 2018 Centenary Programme here.