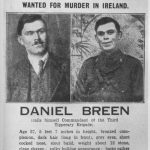 On Friday 15 and Saturday 16 May the second Knocklong Commemorative Seminar 2015 took place at Knocklong Community Centre, Knocklong, Co. Limerick. The rescue of the Tipperary IRA Volunteer Seán Hogan at Knocklong on 13 May 1919 was a sequal to the Soloheadbeg ambush, generally recognised as the first engagement in the Irish War of Independence. Hogan had participated in the Soloheadbeg attack, along with Dan Breen, Sean Treacy and others. He was captured afterwards, and was rescued from RIC custody at Knocklong by Breen and Treacy, who attacked the train carrying Hogan to Dublin, killing two members of the RIC in the process. The rescue precipitated the imposition of martial law by  the British authorities in Co. Tipperary.

The theme of this years seminar was Ex-British soldiers in the War of Independence: a pan-Munster perspective. On Friday evening, the opening session was a lecture on Seán Hogan. This was followed by sessions at 9.30am and 2pm on Saturday 16 May. Speakers will include John Borgonovo, Seán Hogan, Tim Horgan, Pat McCarthy, Gerard Noonan and Pádraig Óg Ó Ruairc. Each session concluded with an open discussion with questions to the speakers.