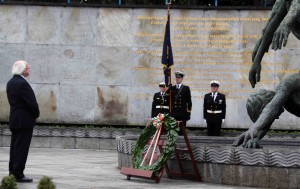 On 24 November an official commemoration took place in the Garden of Remembrance, Parnell Square, Dublin 1, to mark the centenary of the foundation of the Irish Volunteers in the Rotunda Hospital, Dublin. The ceremony, which was open to the public, was attended by President Michael D. Higgins; An Taoiseach, Enda Kenny T.D.; Alan Shatter T.D., Minister for Justice, Equality and Defence; Jimmy Deenihan T.D., Minister for Arts, Heritage and the Gaeltacht; and the Lord Mayor of Dublin, Oisín Quinn.

The ceremony began with a military parade by members of the Defence Forces and was led by An Taoiseach, who introduced President Higgins. After his speech, President Higgins laid a wreath on behalf of the people of Ireland. This was followed by a minute’s silence, after which the Last Post was played and the national flag was adjusted to half-mast. The ceremony concluded with a fly-past by the Air Corps. Afterwards, President Higgins hosted a reception in the Pillar Room of the Rotunda Hospital to mark the opening of the Military Archives’ exhibition on the Irish Volunteers, at which a permanent memorial statue was unveiled.

For the text of the speech made by President Higgins, click here.

To read the special issue of Century Ireland on the foundation of the Irish Volunteers, click here.

From History Ireland: Whatever happened to the Irish Volunteers?