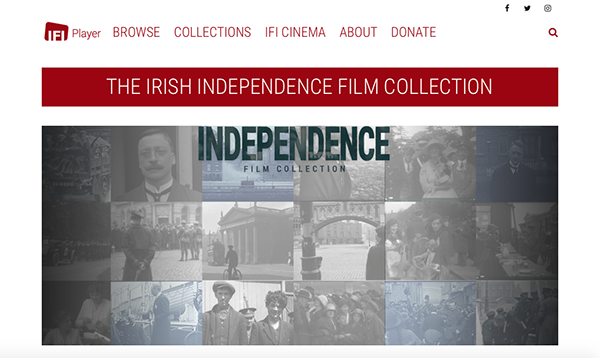 The Irish Film Institute (IFI) have recently launched the Irish Independence Film Collection. Due to the emergence of cine-camera technology in the 1890s, the first three decades of the twentieth century (including the Irish revolutionary period from 1912 to 1923) were the first to be widely documented on film. However, the dearth of indigenous Irish filmmaking during the early part of the last century, means that the moving image record of this pivotal period was predominantly captured by non-Irish agencies, who created newsreels of Irish events to play alongside home-grown stories in cinemas.  In the early part of the twentieth century, before the advent of television, newsreels radio and newspapers, were the predominant way for the public to keep up to date with important events.

Until recently these Irish newsreel stories, filmed by British agencies, had not been held in an Irish archive and many had not been available to the public since their initial distribution 100 years ago. The Decade of Centenaries presented the IFI Irish Film Archive with a unique opportunity to create the Irish Independence Film Collection, comprising Topical Budget and British Pathé newsreels, with support from the Department of Culture, Heritage and the Gaeltacht. As part of this project the IFI was able to repatriate, safeguard and share these important visual documents centralising them in Ireland for the first time and making them available to the Irish public. The IFI worked closely with the British Film Institute and British Pathé, and the original nitrate film prints have been digitised and restored to a remarkably high quality, and the online exhibit has been curated and contextualised with the assistance of staff from the National Museum of Ireland and University College Cork. The IFI has created a project that not only celebrates a momentous period in Irish history but that also has lasting value for the Irish people; all of the material on the collection is free to view.