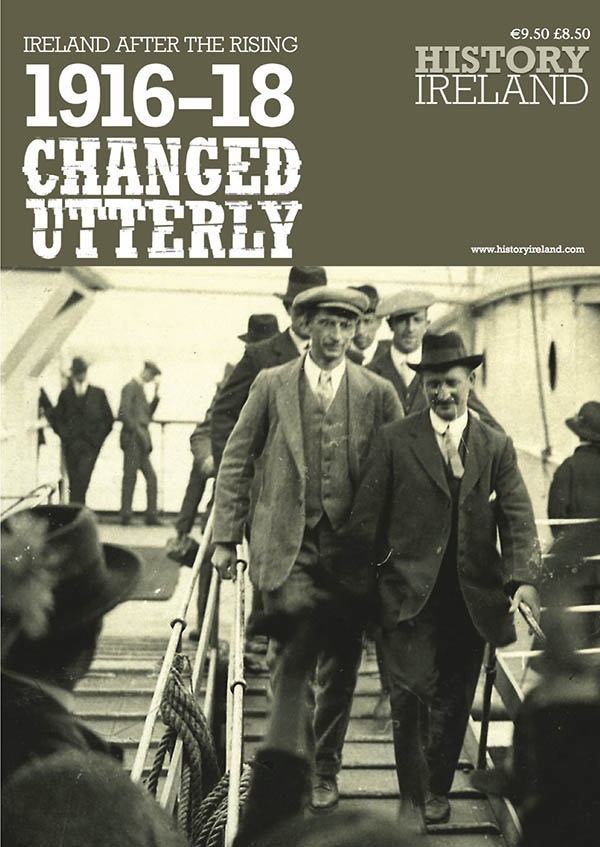 History Ireland have launched a new stand-alone supplement to the regular magazine entitled 1916-18: Changed utterly. Ireland after the Rising. W.B. Yeats famously remarked that Ireland after the Easter Rising was ‘changed utterly’. Few would dispute that he had a point, but how was it changed, by whom, and at whose expense? Edited by John Gibney (RIA), Tommy Graham, and Georgina Laragy (TCD), the new supplement assembles a range of experts, including Marie Coleman (QUB), Joe Connell, Liz Gillis, Brian Hanley (Edinburgh), Ian Kenneally (Revolution papers), Michael Kennedy (RIA), Mary McAuliffe (UCD), Fearghal McGarry (QUB), Ida Milne (Maynooth), Conor Mulvagh (UCD), and Padraig Yeates (SIPTU) to explore life in Ireland in the wake of the Rising. These were years of profound transformation as violent insurrection in Easter 1916 became a landslide political victory less than three years later, against the backdrop of an ongoing global war. From the funeral of Thomas Ashe to the Spanish flu pandemic, and from living conditions and the human cost of the First World War to the growth of the cinema, this supplement will explore how Ireland was changed for ever in the years between the Easter Rising and the outbreak of the War of Independence. Newstalk FM’s ‘Talking History’ show recently devoted a special episode to the issues raised by the supplement, with editors John Gibney and Tommy Graham and contributors Brian Hanley, Joe Connell, and Mary McAuliffe: listen back to the discussion here.

Learn more about 1916-18: Changed utterly. Ireland after the Rising