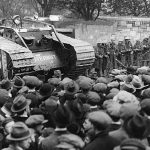 Dublin played a central role in the War of Independence (1919-1921) and Dublin City Libraries’ new exhibition tells the story of this conflict in the capital. Dublin was the seat of the British administration in Ireland and had a heavy police and military presence.

It was vital that the Irish Volunteers contested control of the city and demonstrated that British control over Ireland was loosening.

Using contemporary photographs, newspapers and film, the exhibition charts the origins of the conflict and narrates the ambushes, raids and lost lives of this deadly war. A period Black and Tan uniform is included in the display. 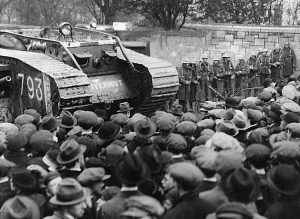 If you would like a more in-depth look at the exhibition, why not sign up for a  free tour/Q&A  with one of Dublin City Council’s historians in residence? There are tours every Tuesday at 11am, Thursday at 1pm and some Saturdays at 2pm during August, September and October.

To book to go on a tour and check availability, please click on this link:

The exhibition is part of Dublin City Council’s Decade of Commemorations programme.