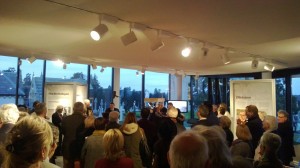 On 11 December 2013 the Minister for Arts, Heritage and the Gaeltacht, Jimmy Deenihan TD, launched a new exhibition at Glasnevin Cemetary Museum to mark to foundation of both the Irish Volunteers and the Irish Citizen Army. Speaking at the event, Shane Mac Thomáis, resident historian at the Glasnevin Trust, noted that the last time that the Irish Volunteers, Irish National Volunteers, and Irish Citizen Army appeared together was at Glasnevin Cemetery, at the funeral of Jeremiah O’Donovan Rossa on 1 August 1915. The actor Jim Roche gave a recital of Patrick Pearse’s famous graveside oration at the grave of O’Donovan Rossa.

The exhibition itself consisted of a range of memorabilia and artefacts relating to the organisations in question, much of it donated by family members. Highlights include one of the Mauser rifles landed as part of the Howth gun-running; the personal bible of Sir Roger Casement; and segments of the 1913 Lockout Tapestry, which is going on display in a range of venues around the country. The launch also included the official launch, by Gary Granville of NCAD, of the official book of the tapestry, edited by Padraig Yeates.

From Century Ireland: The founding of the Irish Citizen Army.

To read the special issue of Century Ireland on the foundation of the Irish Volunteers, click here.

To watch the RTÉ report on the Lockout Tapestry, from Century Ireland, click here.

From History Ireland: Whatever happened to the Irish Volunteers?