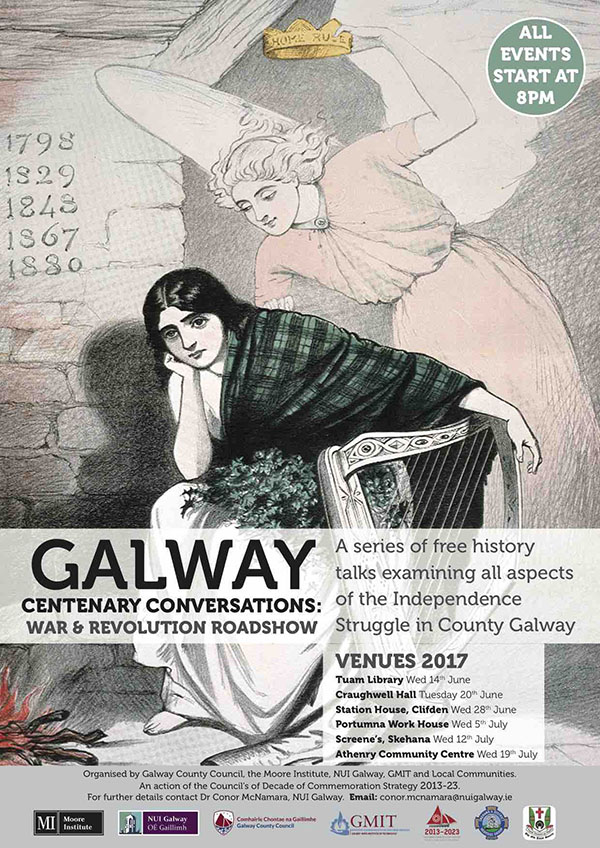 This summer will see a series of free public history events around the County organised by NUI Galway, GMIT, local history societies and Galway County Council as part of its Decade of Commemoration strategy (2013-23). Galway Centenary Conversations: War & Revolution Roadshow will take place in Tuam, Craughwell, Clifden, Portumna, Skehana and Athenry throughout June and July.

The talks will feature an array of local and national historians discussing key events, personalities and developments during the independence struggle in Galway. Topics to be examined include the aftermath of the 1916 Rebellion; the conscription crisis; the 1918 General Election; the War of Independence; Cumann na mBan and the Galway Volunteers. The series is also a chance for the public to offer their family reminiscences of the period and discuss the involvement of local communities and families. National experts will be available to offer advice or support to budding researchers and encourage people to bring along material from their own family’s involvement or any relevant letters or memorabilia.

Topics covered include the 1918 Election; the conscription crisis; Fenianism and the land struggle in Galway; Cumann na mBan and women’s involvement in the revolution in Galway; and the War of Independence in Galway.