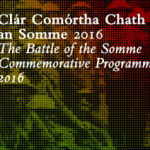 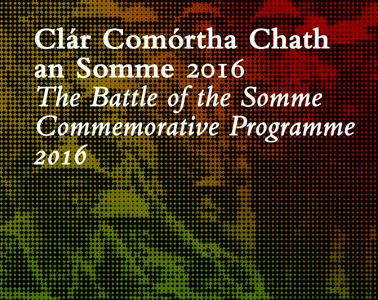 On Friday 6 November 2015 An Taoiseach, Enda Kenny TD, the Minister for Arts, Heritage and the Gaeltacht, Heather Humphreys TD, and the Minister for Foreign Affairs and Trade, Charlie Flanagan TD, announced a programme of events to mark the centenary of the Battle of the Somme in 2016 as part of the Decade of Centenaries programme, which is co-ordinated and overseen by Minister Humphreys.

The Battle of the Somme was one of the bloodiest battles of the First World War. The total number of casualties in the Battle exceeded one million, including thousands of Irish soldiers from the 36th Ulster Division and the 16th Irish Division. In recognition of its significance, the Government has developed the Battle of the Somme Commemorative Programme 2016 to commemorate this period from the beginning of the Somme campaign on 1 July 1916 to its winding down in November 1916.

From the outset of the

battle severe casualties were suffered by the 36th Ulster Division, drawn almost entirely from the unionist community of the Ulster province. The beginning of September saw the 16th Irish Division, drawn mainly from the other three provinces, suffering over 4,000 casualties, of whom 1,200 were killed. Added to these casualties were the Irish soldiers who fought in other divisions. The total number of Irish casualties cannot be calculated with certainty but they affected every part of the island.

The programme will comprise a range of events under four programme strands; ceremonial; historical and education reflection; cultural; and community participation. It will incorporate Ireland’s participation in the official commemoration preparations for events at the Somme, being co-ordinated jointly by the relevant French and British authorities.

Highlights of the programme include:

The principal commemoration for the Battle of the Somme will take place at the Thiepval Memorial on 1 July 2016, jointly hosted by France and the UK (co-owners of the site). Ireland will be officially represented at a high level at this event.

A state-led commemoration will take place on 9 July 2016 at the Irish National War Memorial Park, Islandbridge, in conjunction with the Royal British Legion, on the same weekend as the National Day of Commemorations.

A military ceremony will be held at 7.20 a.m. on 1 July 2016 at the Irish National War Memorial Park, Islandbridge, honouring the Irish Regiments who fought at the Somme and WW1.

The Somme Association will hold its major annual event in Guillemont on 3 September 2016 to marks the participation of the 16th Irish Division which saw action during the first weeks of September. Ireland will be officially represented at this event.

The ‘Other Voices’ project, involving the National Museum and Poetry Ireland, with Dermot Bolger as poet-in-residence (March to August 2016), will explore the stories of Irishmen at the Somme and those who were involved in the 1916 Rising.

The National Archives of Ireland will highlight its digitised collection of wills from soldiers killed in WW1.

A series of commemorative stamps to mark the centenary of Somme will be issued by An Post next year.

UCD will host an event on 9 September 2016 to mark the death of Tom Kettle at Ginchy.

The Irish Embassy in Paris is finalising plans with the relevant French authorities to present a co-production between the Abbey Theatre, Headlong, Citizens Theatre and Liverpool Everyman & Playhouse Theatre of the iconic play Observe the Sons of Ulster Marching Towards The Somme by Frank McGuinness, on the eve of the Somme commemorations in June 2016 in France, close to the scene of the battle.

Glasnevin Cemetery will present an outdoor exhibition starting on 1 July with a focus on the 36th Ulster Division, changing in September to reflect the participation of the 16th Irish Division in September 1916.

Listen to the RTÉ Radio One documentary ‘Survivors of the Somme’.

Launching the programme, An Taoiseach, Enda Kenny TD, stated that ‘2016 is a very important year for Ireland as we commemorate events that shaped the history of our island over the last 100 years. In recent years we have all come to a greater understanding of the many strands of our history from that period. Complementing the Government’s program for the Easter Rising, we are announcing today our 2016 Commemoration Programme for the Battle of the Somme. In commemorating Somme, we are remembering all those from this island who died during this terrible period in 1916. We remember the huge losses experienced by the 36th Ulster Division and the 16th Irish Division and the indescribable impact that this had on the island of Ireland – a loss that has transcended generations. The Somme Programme that we are publishing today will commemorate this important period in our history, and all those who lost their lives, in a dignified and respectful way’.

Announcing details of the Programme, the Minister for Arts, Heritage and the Gaeltacht, Ms. Heather Humphreys, T.D. observed that ‘as we move closer to next year, we must be conscious that events in 2016 will resonate to different traditions on this island in different ways. This programme of events, to remember those who lost their lives during the horrific Battle of the Somme, is an inclusive, respectful and appropriate approach to the commemoration. Through the Decade of Centenaries, we can honour all those who died and who served in the Great War and hear their stories. I encourage everyone to become involved and discover more about this fateful episode of the War’.

Welcoming the programme, Mr. Charlie Flanagan, T.D, Minister for Foreign Affairs and Trade, in welcoming the programme stated that ‘next year, we will join with our neighbours in Northern Ireland and across Europe in remembering the huge losses of lives incurred during the Battle of the Somme in 1916, including the many thousands from across this island. In addition to remembering all those who died, and the deep loss felt by their families and communities, this Programme of commemorative events will help build an understanding of the events of 1916 in all their complexity and diversity, and explore how they have resonated through the years since’.

Click here for full details of the Somme Commemorative Programme.

Post Views: 102
Posted in 2015 events, Archives, Artistic and Cultural, Events in November 2015, Ireland and the World, Other Podcasts, Past, Somme, State events, World War One