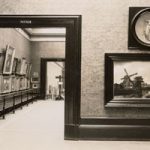 ‘River of words’ was produced by CIANCO Films for Tarbert Bridewell Group in association with RTÉ. The screening took place in the Gallery Lecture Theatre.

For information on the National Gallery of Ireland, click here.