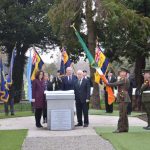 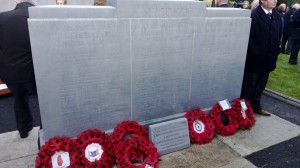 On Monday 31 March Glasnevin Cemetery hosted a ceremony to mark the laying of the foundation stone for a Commonwealth War Graves Commission (CWGC) Cross of Sacrifice, to be erected and unveiled in the cemetery later this year. The Cross of Sacrifice is a standard CWGC memorial, designed by Sir Kenneth Blomfield. Consisting of a cross embedded with a bronze sword, mounted on an octagonal base, it is erected in cemeteries containing more then 40 graves of soldiers commemorated by the CWGC. Glasnevin Cemetery contains 166 Commonwealth burials from the First World War, with another 41 burials from the Second World War.

The foundation stone for the Cross of Sacrifice was laid by Mr Jimmy Deenihan TD, Minister for Arts, Heritage and An Gaeltacht, and Ms Theresa Villiers MP, Secretary of State for Northern Ireland. Also in attendance were the Chairman of Glasnevin Trust, Mr John Green; the British Ambassador to Ireland, His Excellency Dominick Chilcott; and Ms Deirdre Mills, Director of UK Operations, Commonwealth War Graves Commission. The ceremony was marked by the attendance of a colour party from the Defence Forces. 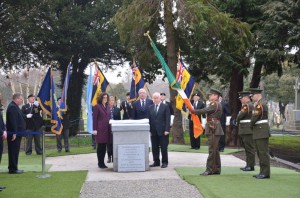 Secretary of State Villiers and Minister Deenihan unveiling the foundation stone for the CWGC Cross of Sacrifice in Glasnevin Cemetery.

The laying of the Foundation Stone is a cooperative venture between Glasnevin Trust and the Commonwealth Graves Commission to ensure those people who lost their lives in the two world wars are ‘forever remembered’. It is planned that the Cross of Sacrifice will be complete in time for a formal unveiling to coincide with the centenary of the outbreak of hostilities of World War 1 in early August. In addition, Glasnevin Trust hosted a meeting, of the Northern Ireland WW1 100 Commemoration Committee during the afternoon, with the committee members, including The Rt. Hon. Jeffrey Donaldson MP, attending at the laying of the foundation stone.

Speaking at the ceremony, Minister Deenihan said that ‘in this centenary year of the outbreak of the First World War, on the foundation stone we lay today, a great memorial cross will be erected in remembrance of all those who lost their lives in that war and in the conflict that engulfed Europe and the world in 1939. This monument will be completed to mark the centenary of the outbreak of the Great War later this year, and will be a poignant reminder – for this and future generations – of the many thousands from Ireland who died in those wars’.

Addressing the gathering John Green, Chairman of the Glasnevin Trust, said that ‘this project is a symbol of how Ireland has moved on and matured in its attitude towards our country men and women who bravely gave their lives in World War 1 and World War 2.  It is playing a significant part in helping to reconcile the social wounds that emerged almost a century ago when the different forms of personal sacrifice of Ireland’s youth both in the Great War and the Easter Rising were harshly compared to each other. While we are still reflecting on how we treated different allegiances and traditions over the last 100 years, we might also consider the powerful symbolism of Daniel O’Connell’s stated purpose in establishing Glasnevin Cemetery – ‘to bury people of all religions and none’.  We have diligently followed O’Connell’s instruction, through all the conflicts, for 180 or so years here at Ireland’s necropolis and will continue to do so’.

Deirdre Mills, the CWGC’s Director of UK Operations, stated that ‘the Commonwealth War Graves Commission is delighted that our joint initiative to erect a Cross of Sacrifice in Glasnevin Cemetery has reached this important milestone. Work to complete the Cross is on target and, when complete, it will become an important focus for ongoing remembrance of those who died in the two world wars. We are extremely grateful to the Irish Government, public, and the Glasnevin Trust, all of whom have done so much to support our work of commemoration and remembrance in Ireland’.

The cross to be erected in Glasnevin will be a freestanding four point limestone Latin cross, 7 meters tall, and mounted, as is customary, on an octagonal base. It is expected to be unveiled in time for the centenary of the outbreak of the First World War. 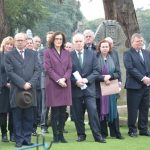 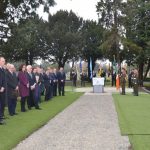 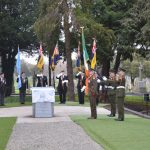 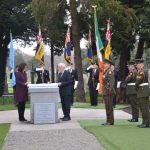 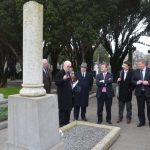 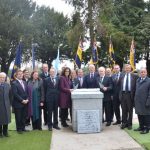 Post Views: 55
Posted in 2014 events, Dublin, Ireland and the World, Past, World War One