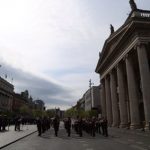 A ceremony to mark the 98th Anniversary of the 1916 Easter Rising took place outside the GPO, O’Connell Street, Dublin 1, on Easter Sunday 20 April 2014, commencing at 12pm. The ceremony was open to the public, and was led by the President Michael D. Higgins, An Taoiseach, Enda Kenny TD, and the Minister for Justice, Equality and Defence, Alan Shatter TD. The ceremony involved prayers of remembrance, a reading of the Proclamation by Capt. Sean Coffey of the Defence Forces, and the laying of a wreath by the President. The ceremony concluded with a fly-past by the Air Corps.

To watch the RTE News feature on the ceremony, click here.

To watch a contemporary British Pathé newsreel on the aftermath of the Easter Rising, click here. 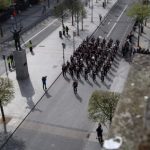 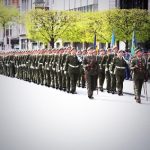 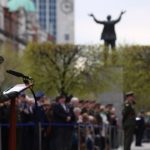 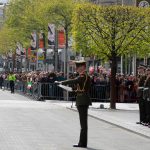 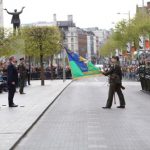 Taoiseach Enda Kenny arrives at the GPO for the ceremony Taoiseach Enda Kenny at the GPO 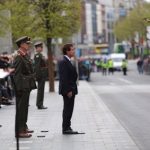 Minister Alan Shatter arrives at the GPO for the ceremony 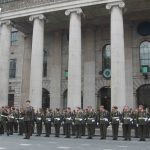 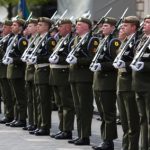 The Guard of Honour at the GPO 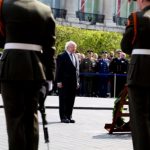 President Higgins at the GPO The Irish flag at full mast over the GPO