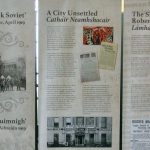 Exhibition and Film Screening: ‘The Limerick Soviet: the General Strike of 1919’ 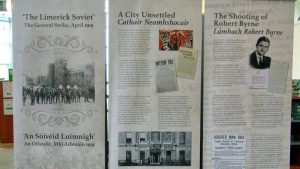 In April 1919, a general strike took place in Limerick City where for two weeks, workers took over the city controlling food production, prices and even creating their own currency. The story began with the attempted rescue of Robert Byrnes who died in Meelick of injuries sustained in the attempt. Martial law was imposed after his funeral and the unions voted for a general strike in protest. This series of panels developed by Watch House Cross Library in Limerick tell the story of the Soviet.

A screening of the documentary ‘The Limerick Soviet’ will take place on Friday, 13 Sept at 6.30pm.

Free exhibition during library opening hours. Contact the library for more information on (061) 364266 or here.