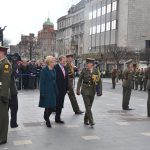 The Taoiseach, Enda Kenny TD, attended the ceremony to mark the 96th anniversary of the Easter Rising at the GPO on Easter Sunday April 8th, 2012.

President Michael D. Higgins led the ceremony in which Defence Forces personnel, including a brass band and representatives of the Army, Air Corps and Naval Services also took part. President Higgins laid a wreath to commemorate those who died in 1916, after which a minute’s silence was observed.

The ceremony concluded with a flypast by members of the Air Corps. 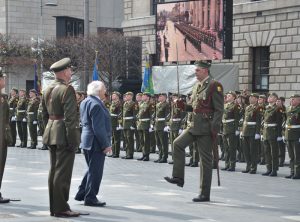 The ceremony was well attended by members of the public. Large video screens were erected on either side of the GPO to relay the ceremony to the public.