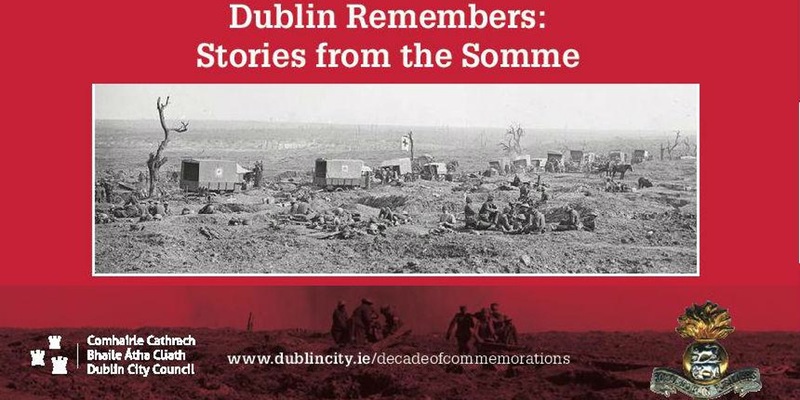 The Battle of the Somme was a key Allied offensive during World War One. It began on 1st July 1916 and when it ended 141 days later over one million men had been killed or injured. This included the loss of over 3,500 Irish born soldiers. The exhibition focuses on personal stories of individual Irish men who fought at the Somme between July and November 1916, mainly serving with the Royal Dublin Fusiliers. Some were killed, others injured, and even those who survived unscathed returned to an Ireland which was radically different following the Easter Rising in April 1916.

The exhibition draws upon the Royal Dublin Fusiliers Association archive, held in Dublin City Archives, and includes photographs, medals, uniforms, documents and other original artefacts from that period. Audio recordings from selected letters and diaries detail first-hand accounts of life in the trenches of the Somme, whilst interview footage, courtesy of RTE Archives, provides further eye-witness accounts of the horrors and tragedy of this bloody conflict. The exhibition also considers what public reaction to the Battle of the Somme was like in Dublin in 1916, and how the Somme has been commemorated in Ireland over the past 100 years.

The exhibition was developed by Dublin City Archives on behalf of Dublin City Public Libraries and Archives, and is funded by Dublin City Council Decade of Commemoration.The exhibition will be open to public access from Mon-Thurs 10am-8pm, and Fri-Sat 10am-5pm. Guided tours are available to a range of visitor groups (8-20 people) including school groups, third-level students, Adult Education Students, heritage and historical Groups, and social clubs. Group tours require a minimum group size of 8 people and can be booked here. If you would like to book a guided tour as an individual or small group please contact cityarchives@dublincity.ie. The tours will be given by members of the Royal Dublin Fusiliers Association, who will introduce exhibition and provide further information on Irish participation in World War One. The exhibition runs until 23 December 2016.

From Century Ireland: The battle of the Somme.