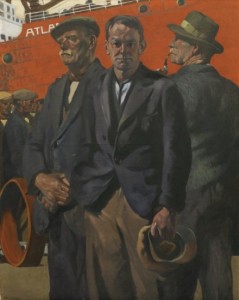 At the beginning of August 1913, the city of Dublin was on the threshold of a momentous showdown between organised labour led by James Larkin, founder of the Irish Transport and General Workers Union, and Dublin’s capitalist entrepreneurs represented by the leading business magnate, Cork-born William Martin Murphy.

Against this backdrop of bitter class conflicts and the rise of organised labour, the debacle continued regarding the establishment of a permanent Gallery to house the art collection first offered to Dublin by Sir Hugh Lane in the winter of 1904.

Dublin Divided: September 1913 provides an opportunity to reflect on the different agendas of the individuals involved in that momentous and bitter dispute and explore how the history of the Gallery was interwoven with the Lockout. The workers’ leader, James Larkin, though raised in poverty, appreciated art and beauty and sought the cultural as well as economic and social liberation of the manual labourer. Seán O’Casey noted that Larkin wanted the rose along with the loaf of bread on a worker’s table.

Larkin supported Lane’s Municipal Gallery project, and declared that William Martin Murphy, for his meanness in the matter of Sir Hugh Lane’s offer, would be condemned to keep an art gallery in hell.

A century later, the Hugh Lane Gallery’s collection contains many portraits of the key individuals who were active in the Lockout as well as works by artists who became involved in the dispute, including William Orpen and George Russell (AE). The exhibition also provides a rich resource of evocative images that depict life in Dublin in the late nineteenth century and first decades of the twentieth century.

The exhibition features paintings, sculpture and drawings by artists including John Lavery, Sarah Purser, John and Jack B. Yeats, Casimir Markievicz, Auguste Rodin, Sarah Cecilia Harrison, Maurice MacGonigal and Louis le Brocquy. It was curated by Margarita Caddock, with the support of the Department of Arts, Heritage, and the Gaeltacht.

For further details of the Dublin Divided exhibition, click here.