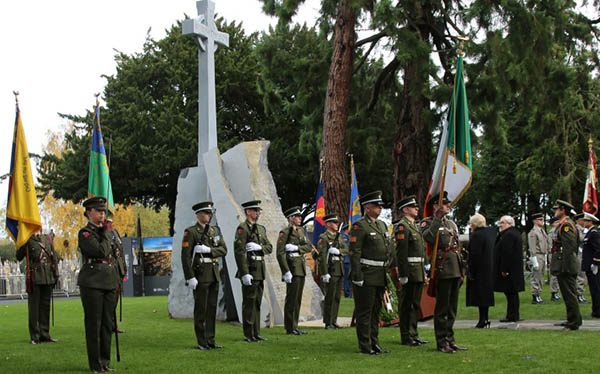 On Sunday 13 November the Minister for Arts, Heritage, Regional, Rural and Gaeltacht Affairs, Heather Humphreys, TD, and the French Minister of State for Veterans and Remembrance at the Ministry of Defence, Jean-Marc Todeschini, dedicated the ‘France – Ireland Memorial’ at Glasnevin Cemetery, in conjunction with Glasnevin Trust. The memorial – a monument created specially by the Beaux-Arts de Paris (Paris Fine Arts School) – is being gifted to the Irish people by France, in recognition of those Irish men and women who died in defence of France, particularly during the First World War. Part of the memorial is a replica of the original wooden cross (now housed in the War Memorial Gardens at Islandbridge in Dublin) built by the men of the 16th Irish Division for the churchyard at Ginchy, following the events there and at Guillemont in September 1916 in the course of the Somme offensive, when 1,200 men from the division lost their lives.
Minister Humphreys said that ‘this is a very significant gesture by the Government of France, to gift Ireland with this replica cross which will stand in Glasnevin Cemetery in recognition of the close bond which exists between our two countries. Tens of thousands of Irishmen went to fight on the battlefields of northern France during the First World War, and many of them made the ultimate sacrifice’, while Minister Todeschini observed that ‘this memorial is a unique work of art, a creation by young artists and sculptors from the Beaux-Arts de Paris, to express not only a message of deep thanks and recognition but also to illustrate the role of youth to shape a better future…the memorial is meant to be a lasting tribute from France and the French people to all Irish from all the island of Ireland and beyond who constantly have expressed their solidarity and their commitment – even unto the supreme sacrifice – to the values and the freedom of France: Liberté, Egalité, Fraternité’. John Green, chairman of Glasnevin Trust, said of the memorial that ‘its position in Glasnevin Cemetery is significant as thousands of those who served on French soil in the defense of France have found their final resting place here, as have so many from the different strands and traditions in Irish history since 1798. Its unveiling is a hugely symbolic moment in recognising Ireland’s contribution to France and the enduring fraternity of our two nations. It will stand as a reminder to future generations of the mutual experience of France and Ireland, but also of the frightful cost of war’.

From RTÉ Radio One’s The History Show: The France-Ireland memorial.

Post Views: 104
Posted in Editor's Blog, Ireland and the World