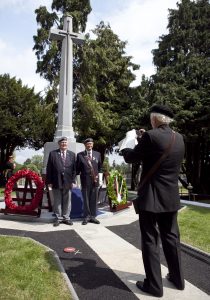 News. No repro Fee.31072014.
Pictured is Ronnie O’Connor & Frank Brien of the Royal Air Force’s being photographed by John Jowett of the Royal British Legion prior to a ceremony where President, Michael D. Higgins and HRH The Duke of Kent, President of the Commonwealth War Graves Commission unveiled a monumental Cross of Sacrifice at Glasnevin Cemetery to coincide with the centenary of the outbreak of hostilities in the Great War and to commemorate the many thousands of soldiers from Ireland who died as a result of either WW1 or WW2, especially the 208 who are buried in Glasnevin. Photo Chris Bellew / Copyright Fennell Photography 2014