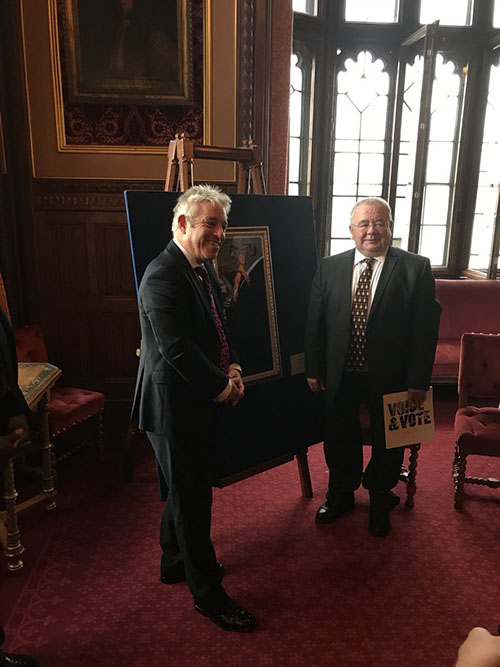 On Wednesday 18 July 2018  Ceann Comhairle Seán Ó Fearghail presented John Bercow MP, Speaker of the UK House of Commons, with a replica portrait of Constance Markievicz on behalf of the Oireachtas. It is a reproduction of a 1901 original by Boleslaw von Szankowski, held by Dublin City Gallery The Hugh Lane. The presentation of the painting forms part of the Votáil100 initiative marking the centenary of women’s suffrage, as Markievicz was the first women ever elected to the Uk House of Commons, though as a Sinn Féin MP she did not take her seat. The ceremony at Westminster was attended by a number of members of the Oireachtas, including Senators Ivana Bacik, Alice-Mary Higgins and Rose Conway-Walsh, Fiona O’Loughlin TD, and Catherine Martin TD.

Constance Gore-Booth (1868-1927), later Countess Markievicz, was born into a prominent Protestant landowning family in Co. Sligo. She was brought up and educated at the family seat of Lissadell, and seemed to be embarking on a similar path to many young women of her class when she was made her debut in society before Queen Victoria at Buckingham Palace in 1887.

She attended art college in London (in the face of opposition from her parents) but by 1896 she was becoming increasingly interested in the issue of women’s suffrage. In 1898 she went to Paris to continue her studes, where she met Casimir Markievicz, a fellos student and Polish count whom she married in 1898. They later moved to Dublin and became fixtures in artistic and cultural circles. By 1910 Constance had separated form her husband (they remained on good terms and she kept her title) and had become increasingly interested in radical nationalist politics; in 1911 she was arrested for protesting against the visit of George V. She was instrumental in founding the republican boy boy scout movement Na Fianna Éireann and Cumann na mBan (the female auxiliary to the Irish Volunteers). Alongside the causes of feminism and republicanism, Markiewicz became interested in socialism. She organised soup kitchens during the 1913 Lockout and joined James Connolly’s Irish Citizen Army. An enthusiastic and eloquent militant, she was fiercely opposed to the British war effort but as a member of the Citizen Army fought in the Easter Rising and was imprisoned until June 1917, when she was released during the general anmesty for prisoners. By now she had converted to Catholicism, and she also became involved with the revived Sinn Fein (she had originally joined the party in 1908). Having been imprisoned in 1918 on suspicion of plotting with Germany, in December she became the first woman ever elected to Westminster as a Sinn Fein MP for Dublin. She was released in March 1919 and became the minister for labour in the first Dáil but was soon rearrested for making a seditious speech and served four months hard labour in Cork. She received a two year sentence in September 1920, having spent most of the time since her previous release on the run.

Markievicz vehemently opposed the treaty of December 1921, and spent much of the civil war on the run, devoting herself to propaganda. She was elected to the new Dáil in August 1923 but refused to swear the required oath of allegiance to the king and was barred. She was arrested yet again in November 1923 for organising a petiton for the relase of republican prisoners but was released herself before Christmas after going on hunger strike. Markievicz drifted to the margins thereafter but joined Éamon de Valera’s Fianna Fáil on its founding in 1926, and was elected as a Fianna Fáil TD in June 1927, but her colourful career had taken a toll and she died after a short illness in July 1927. ‘Countess’ Markievicz remains one of the most eye-catching and famous individuals of the Irish revolution: her ascendancy background and bohemian youth gave way to a ferociously militant republicanism and a commitment to social justice that was perhaps unusual amongst many of her peers; the latter ensured that she was held in great affection by Dublin’s poor. She is buried in Dublin’s Glasnevin Cemetery.

The portrait will be on display as part of the UK parliament’s ‘Voice & vote’ exhibition until 6 October 2018.

Posted in Editor's Blog, Ireland and the World and tagged Markievicz, Westminster